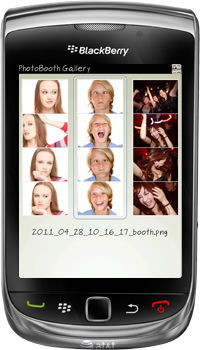 We first told you about Photo Booth by S4BB Limited back in May. If you aren't familiar with the product, it allows you to create photo strips automatically on your BlackBerry. I received notice tonight that the app has been updated to v2.4.5 and now includes integration with BlackBerry Messenger. After taking the four pictures for the photo strip you now have the option to send the resulting image to a BBM contact. The only catch with this feature is that the person you're sending the image to must also have the app installed, and you have to be on the 6.0 version of BBM. I've used this app on both my BlackBerry Torch and on my Bold 9700 with no real issues.

For more information/screenshots and to purchase Photo Booth