French automotive brand Peugeot made a statement at CES 2023 with the unveiling of their all-electrict Inception Concept car. Peugeot and parent company Stellantis have dabbled a bit in EVs, but like many automakers are rapidly making the shift to electric. And the Peugeot Inception concept stakes out their ambitions with a stark style that's sure to turn heads — and be very divisive.

Let's hit the top-level specs here: the Peugeot Inception Concept is an all-electric sedan powered by an 800-volt 100 kWh battery pack feeding a dual-motor power train capable of hitting 60mph in under 3 seconds. Peugeot claims a range of 800 km / 500 miles on that battery pack, which is quite the stretch — reality will probably be much closer to 650 km / 400 miles.

None of that is particularly exciting. You can buy EVs that check those boxes today. What sets the Peugeot Inception Concept apart is the style. It's like a knife, with sharp corners and a sleek, low stance. The sharp-cornered metallic body evokes the stainless steel style of the classic DMC DeLorean, but is actually a unique single-coat fine metallic paint coating, while the windows utilize architecturally glazed and coated glass like you'll find on a skyscraper. The center-opening side doors open wide without a traditional B pillar, exposing a sharp and angular cockpit that looks cool but is almost certainly hugely uncomfortable despite their claims of molded textiles and 3D-printed velvet surfaces. Overall, it looks like a modern version of a car made for a French RoboCop. 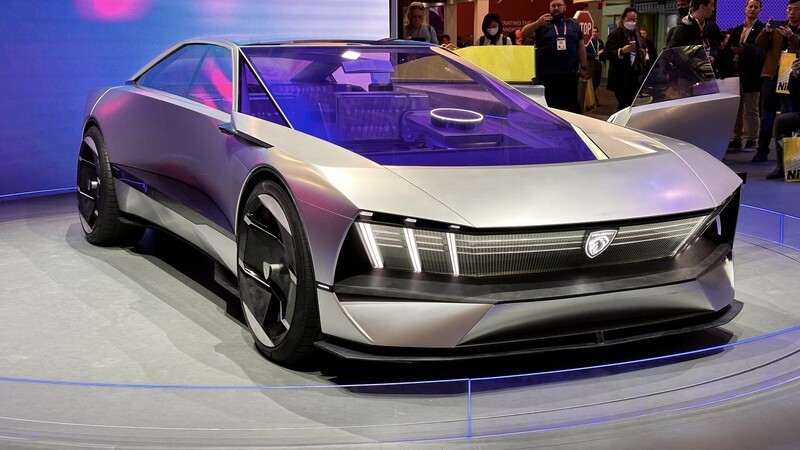 And then there's the steering wheel, or rather as Peugeot has branded it "the Hypersquare control system". It drops the traditional steering wheel in favor of a LCD-equipped panel with four touch-sensitive circular cups that you can control with just the spin of a fingertip. Just writing that makes me feel naughty. Of course there are a bunch of displays all over the car cabin, and even a cylindrical display above the steering controls and strip LCDs on the exterior doors for some reason.

A lot of this conceptual design stuff won't ever see production. We're far more likely to move straight to cars without any sort of driver-managed steering control thanks to full autonomy than we care to see this sort of novel control mechanism. And I have a hard time believing that Peugeot will fully commit to this divisive interior and exterior design versus just incorporating some of the language into a more traditional look. But that's what concept cars are for — they're exercises in design and engineering and blistering creativity, not something that's supposed to be rolling straight to the production line.

The Peugeot Inception Concept isn't the only thing that global automotive conglomerate Stellantis had to show off. They also rolled out their Dodge Charger EV, which while first shown off a few months ago was the first time I got to see it in person. I was hopeful that this car was one of those that looked better in person than it does in photos, but I gotta be honest... it's just as awkwardly proportioned if you're standing there next to it. It's not an attractive car, and I have a philosophical objection to the fake electric roar sound Dodge designed for this electric muscle car.

Also new at CES was the RAM 1500 EV, a much more straightforward electric pickup truck to take on the likes of the Ford F-150 Lightning and upcoming Chevy Silverado EV. It's not a terribly exciting truck, though it does take on a bit bolder styling than the Ford and Chevrolet trucks that largely adapted the look of their gas-powered base models. There are a lot of features here, such as a pass-through midgate with third-row jump seats, an AI voice assistant, exterior movie projector, and an app to measure items to make sure they'll fit. The most interesting but kinda concerning feature is "Shadow Mode", where the RAM 1500 EV will follow a person walking in front of it, which could be useful for moving the truck around a short distance without having to getting inside, but also feels pretty disconcerting. But important specs like the battery range, cargo and towing capacity, and price remain elusive for now.