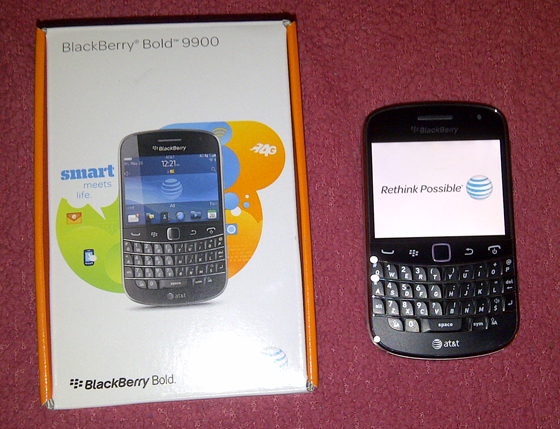 On behalf of CrackBerry Nation and AT&T subscribers, we the commenters to this blog post request that you hurry up and release the BlackBerry Bold 9900. We feel that "later this year" is too wishy washy of a time frame and rumors pointing to a November launch date are simply too far away. It's unacceptable. With the BlackBerry Bold 9930 already available from Sprint and Verizon, and T-Mobile's Bold 9900 available August 31st nationwide (it's already available on business channels), we think AT&T is really missing out on sales here and ticking off a lot of subscribers who want to upgrade to the BlackBerry Bold 9900 NOW. We know it's not Research In Motion holding things up here -- it's you AT&T -- and we think it's time you change your priorities and make the Bold 9900 available for purchase asap.

Our CrackBerry forums are full of AT&T subscribers looking to buy the Bold 9900 from AT&T, and every day we're getting overloaded with emails and tweets asking when the Bold 9900 will be available from AT&T. There IS demand for this phone and we need the requests to stop (it's distracting!). Enthusiastic BlackBerry fans have chosen not to wait - they are buying BlackBerry Bold 9900s from other carriers to unlock and use on AT&T. The world would be in a better state right now if you did the right thing and put the Bold 9900 up for sale. Delaying its release does not serve the interests of your consumers.

We're not sure why you haven't announced an exact date for the release of the Bold 9900 or put it on sale yet. We get that the now-available BlackBerry Torch 9810 is exclusive to AT&T in the USA so maybe you're giving it some time in the spotlight, but a huge amount of people want the Bold 9900! And if you're delaying its arrival until after a new iPhone launches for some reason, well that's just silly. People who want the best physical keyboard ever put on a smartphone are going to want the Bold 9900 whenever it's released, so it might as well hit the market now. Or maybe you're mad still about the whole BlackBerry Bridge thing on the PlayBook and want to punish RIM a little bit. If that's the case, get over it. The BlackBerry Bold 9900 is too hot a phone to hold back from people's twitchy thumbs.

We appreciate your attention to this matter and look forward to a speedy release of the BlackBerry Bold 9900 on AT&T.