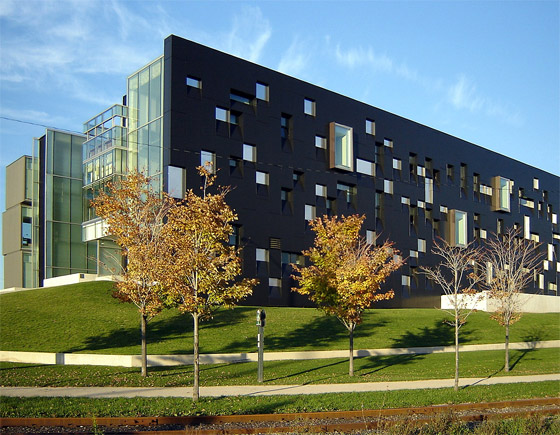 Our world - the world you can see, the world you can touch - is governed by gravity. Just as the mass of the sun holds tightly to the eight planets of our solar system, it is the enormous mass of the earth, 6 septillion (6*1024) kilograms, that keeps you from flying off into space. Yet in the subatomic world of the very small, gravity appears nonexistent. Einstein's world of spacetime and the subatomic realm of Neils Bohr and Werner Heisenberg follow different laws, and yet they both exist and create the world we live it. One of the missions of the Perimeter Institute is to study and unify that divide.

In 2000, Mike Lazaridis' love of science and learning would lead him to create an institution whose mandate was to simply think. Think about the possibilities in explaining the world around us. The founder and Co-CEO of Research In Motion, founded the Perimeter Institute for Theoretical Physics with a personal donation of $100 million. Mike L. wasn't the only RIM investor; he convinced Doug Fregin and Jim Balsillie each donated $10 million from their own pockets. In 2008, Mike L. donated a further $50 million to PI.

In 2004, the center for learning opened near the campus of the University of Waterloo, Ontario, Canada. The Perimeter Institute studies some strange things, and the resident scientists and mathematicians struggle with some very difficult concepts each and every day. Though their understanding of higher maths and physics, they are beginning to tackle some truly difficult questions. Featured on the BBC's Horizon, several researchers presented credible theories on what they believe may have existed before the big bang.

Waterloo, Ontario, Canada is Research In Motion's home. RIM began at the University of Waterloo; the company's buildings sit right off the main campus. More than that, RIM has made Waterloo its home. Through generous donations from its employees, RIM has invested in the city. Jim Basillie donated $20 million to create the Centre for International Governance Innovation with the help of an additional $10 from Mike L.  Even less glamorous donations nevertheless benefit the city. Recently, RIM's donation to the The Food Bank of Waterloo Region allowed them to purchase a new refigerated truck. This was in addition to the company's annual food donation drive.

RIM has helped to turn Waterloo into a center for research and development. That in turn puts RIM in the heart of the latest and greatest in scientific achievement. And that's right where they should be, at the forefront of technology.