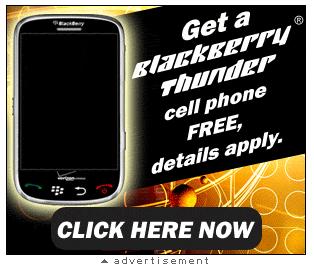 You know there's a buzz around a device when it hasn't been officially announced by the manufacturer and companies are already promoting contests to give it away. One of our readers, Colby, logged into his MySpace account over the weekend and was suprised to see the ad in this post! --->

The link is safe enough to click, though if you actually want to register for your chance to win a BlackBerry Thunder and "Touch the Cellular Storm" in this contest it looks like you'll have to jump a few hurdles and likely put up with some spammy stuff (and they want your card #). Worth it if you win, but probably not worth the pain. So proceed at your own risk.

While we're talking about the Thunder, some interesting forum posts have popped up in recent days. Over at HowardForums, a trusted source has said the Verizon Thunder will feature a gig of internal memory and a 3.2 megapixel camera (along with the abilty to purchase Rhapsody tracks OTA and a tentative Verizon launch date of October 8th). In the CrackBerry forums, there's some speculation that it will feature 10 gigs of onboard memory (plus microSD expansion slot) along with a 5 megapixel camera. I hope for the latter, but would be happy with the former. Could it be that both are right and there are multiple versions of BlackBerry touchscreen prototypes floating around out there?!! What kind of specs does RIM's touchscreen BlackBerry have to feature in order to leave you Thunderstruck?!