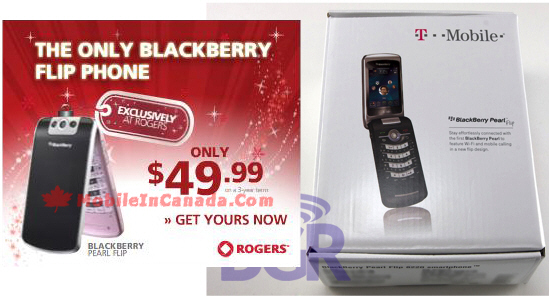 Weekends are normally pretty slow for BlackBerry news, but that's definitely not the case this weekend. The Storm has received its fair share of attention, now we have some news for all the Pearl 8220 fans out there...

It looks like we can add PINK to the list of colors the Pearl Flip will soon be available in. MobileInCanada.com posted a little Rogers advertisement showing the BlackBerry Flip Phone in Pink. (via BBCool)

Also, The Boy Genius got his hands on a T-Mobile Pearl 8220 and has posted some unboxing photos and initial impressions:

As far as the device goes, we're pretty disappointed. Not so much because it's absolutely terrible, just because the Pearl Flip feels like a prototype and not a final build. Even though this is a retail unit. The displays are a complete letdown, and that's not because we've been spoiled by the Bold. It's because they are really bad. For some reason the outer and inner screens are pixelated beyond anything we've seen recently, and they are probably the worst displays we've seen on a BlackBerry since... well, a long time. We understand it's not a high end device, but is there any reason this thing should be looking like it came out of 2001? The feel of the Flip is fine - it's a little light actually - and when opened, it's perfectly weighted.

Not a great first impression for the BG. You can click here for more photos and full post. I used the Pearl 8220 for the better part of two months (before the Bold and Javelin got me BIG TIME distracted). I think it's finally time for me to assemble my long-term 8220 use thoughts into a post (check out the hands-on hardware review here). You can look for that on the blogs tomorrow.