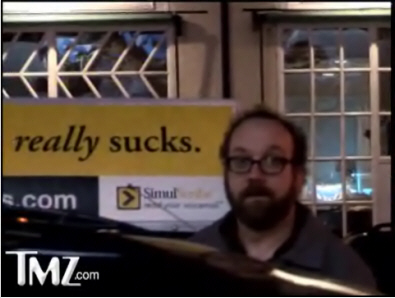 I'm not sure on the statistics, but it seems to me in today's online world that Viral PR is more effective and cheaper (hopefully cheaper! though I'm sure there are some companies that pay a lot in hopes of getting picked up virally) than traditional advertising.

That said, I feel compelled to play my part in the Viral PR machine and post this story of Paul Giamatti (star of the movie SideWays)running into a Taxi cab that was carrying around a SimulScribe ad. For those who don't know, SimulScribe's leading product is SimulSays, which is a Voicemail to Text solution for your BlackBerry (I use it myself and I love it!). I actually gave SimulSays a Best of WES 2007 award last May because I liked it so much.

So if you're SimulScribe and get struck by a cab driven by a "star", what do you do? Turn it into a PR opportunity...check out this Press Release that just came in from SimulScribe (after the jump):

January 14, 2008 (New York, NY) - SimulScribe, the largest provider of voicemail-to-text services and visual voicemail application provider in the U.S., Canada, Australia and Europe, offers free accounts to those involved in a recent car accident. Reported by TMZ.com, "Sideways" star, Paul Giamatti collided with a New York City taxi cab on the night of January 10th on Lafayette Street. Police told a TMZ.com staffer that the incident occurred while Giamatti was entering traffic from the street curb. Thankfully, no one was injured or arrested.

The taxi cab Giamatti struck is part of SimulScribe's "Voicemail Sucks" advertising campaign which can be seen in the TMZ.com video. Over 500 taxi cabs in the New York City area are part of SimulScribe's campaign  that include tag lines displayed on taxi tops that read "It sucks, it really sucks," "We shut people up" and "Stop the voices" among others. "When we saw the image of Paul Giamatti in front of one of our taxi cab advertisements we felt it was an ironic juxtaposition of the situation and the tagline "It sucks, it really sucks,"" said James Siminoff, founder and CEO of SimulScribe. "We thought it would be nice to offer a free account to everyone involved in the accident to generate some good feelings this New Year."

Way to go SimulScribe for turning an accident into some free-publicity. I'd do the same thing! Click Here to see the video (or the image above).