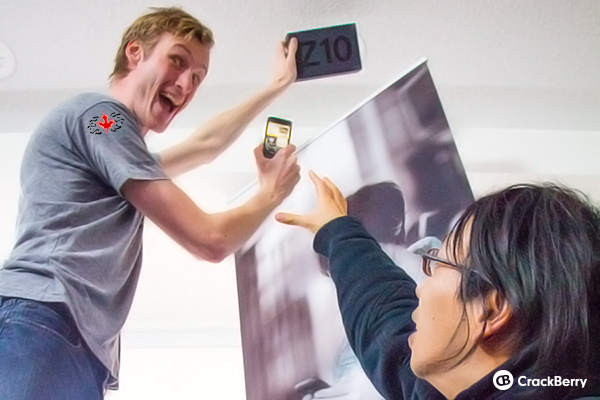 CrackBerry's I Got My BlackBerry Z10 thread is already starting to fill up with replies. Lots of Z10s were given away at the BlackBerry 10 launch events, and the Zed 10 went on sale in the UK this past Thursday. In Canada, Zed 10's are already sitting in the back of carrier stores, just waiting for Tuesday morning to hit so they can go on sale.

In the United States, however, BlackBerry fans are sitting on the sidelines, watching all of the fun unfold everywhere else while they wait until March to be able to buy the Zee 10. Based on the reaction of US-based members on CrackBerry, the waiting is not getting any easier as the days go by. For example, almost every time I click on a blog post and scan through the comments I come across at least one comment linking to this Bring the BlackBerry to the USA Sooner petition (this article is in honor of that act; please go sign the petition so these members can stop link spamming it across every post on the site). I'm sure tomorrow's BlackBerry Super Bowl commercial will be awesome, but it won't tell Americans they can run to the store on Monday to buy a new BlackBerry 10 phone.

We ran the poll already asking America how they were coping with the wait until March for the Zee 10, and 56% of you said you were ticked off. The rest of you we're okay with it and understood the wait could come with some benefits, like more app titles in BlackBerry World at launch. We further analyzed the rationale and and potential silver lining associated with BlackBerry 10 launching in the U.S. a little later rather than sooner. Logically, I understand it and get it. It's not *all* bad.

But emotionally, I just don't care. I wish America could have the Z10 this coming week too. The waiting just sucks. I feel bad for everybody in the US right now who wants a BlackBerry Z10. Right now the CrackBerry fans in the US are sitting on the sidelines watching the rest of us who already have a Z10 or will be getting one this week have all the fun, and we are having fun. Seriously, the last 72 hours have felt like the second coming of CrackBerry again. For me personally, it's like we just rewound the clock to 2008. The site is BUZZING. We have so much to talk about. The excitement is there. The device is here. It's all new. We have sooo much to write about that we can't type fast enough. I always have fun, but I haven't had *this much fun* in years.

I sincerely hope the BlackBerry Z10 comes to the USA not one day longer than is necessary to get it launched. I'm not sure there's much I can say to help the situation here. I will say that February is the shortest month of the year, which at least saves a few days of waiting until March. As I'm sitting in Canada as I type this, I'll make everybody south of the border a promise. I promise CrackBerry's honeymoon phase with the Z10 will not be short lived. When we get a new device, things get crazy for a while around here on CrackBerry. It's over the top, but it's awesome. I promise that when the Z10 finally hits US carriers, that we'll keep the Z10 honeymoon phase going for a long time, so you feel just as excited when you get your Z10s as I do right now.

As for that petition to bring BlackBerry 10 to the U.S. sooner, I'm not sure if it'll help, but signing it definitely won't hurt. Hit it up at the link below.

Sign the Bring BlackBerry to the USA Sooner Petition