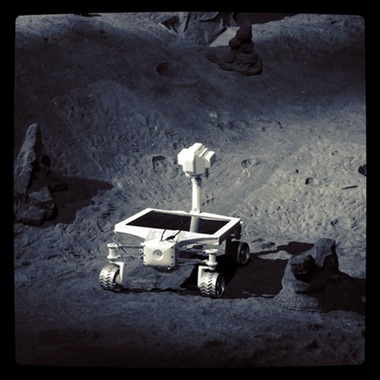 When RIM invested into QNX it wasn't just for their BlackBerry Tablet OS. As has been noted many times, QNX has been around for quite some time and is found in many places today -- from cars, elevators, medical instruments and even defense and security applications. RIM knew this and has no intentions of disrupting QNX's current operations. In fact, it's something that is often overlooked when referring to RIM and their recent dramatic demise headlines. QNX was an investment for RIM that extends well beyond the BlackBerry Tablet OS space. Apparently everyone forgot that QNX was quite a profitable company on it's own and they are now a part of RIM.

Now, a group named The Part-Time Scientists is hoping to take QNX to the moon with their entry into the Google Lunar X Challenge.  QNX's role here? The Part-Time Scientists have chosen QNX as the OS their rover "Asimov" will run due to it's strengths in real time operations. They've been working on the robot in their spare time in hopes to claim a portion of the $20 million prize for landing their rover on the moon and have it send information back to earth. That prize, jumps to $30 million if the rover survives the extreme conditions of the moon and can capture images of the Apollo landing site. Needless to say, we wish them all the best on their mission -- they're currently among the top 5 of the 30 entrants that are most likely to succeed on their mission and that alone is something to be proud of.

Source: On Q - The QNX Blog