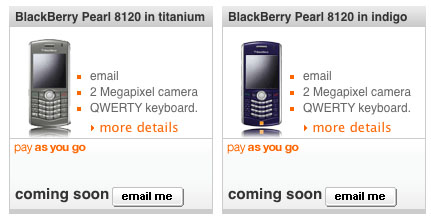 D'oh, my bad! I somehow missed this one when it came through to my inbox this morning from Orange UK and just caught it now...

I know you're passionate about all things BlackBerry so you probably heard the talk a couple of weeks ago that Orange is planning to launch the BlackBerry Pearl 8120 on Pay As You Go in the UK. We now have the offer confirmed so I wanted to give you a heads-up before the official announcement goes out tomorrow.

From February, Orange will be the first operator in the UK to offer BlackBerry on Pay As You Go so we're really looking forward to hearing what customers think.

Depending on how it goes down we'll then look to extend the offer to other BlackBerry models in the not too distant future. The handset will cost £145, and the monthly BlackBerry Internet Service will cost £5. We will also have a colour exclusive of the Pearl in indigo.

There you have it. Pay As You Go BlackBerry coming to Orange UK. The official press release will go up here, so keep your eyes locked if you're interested to learn more!