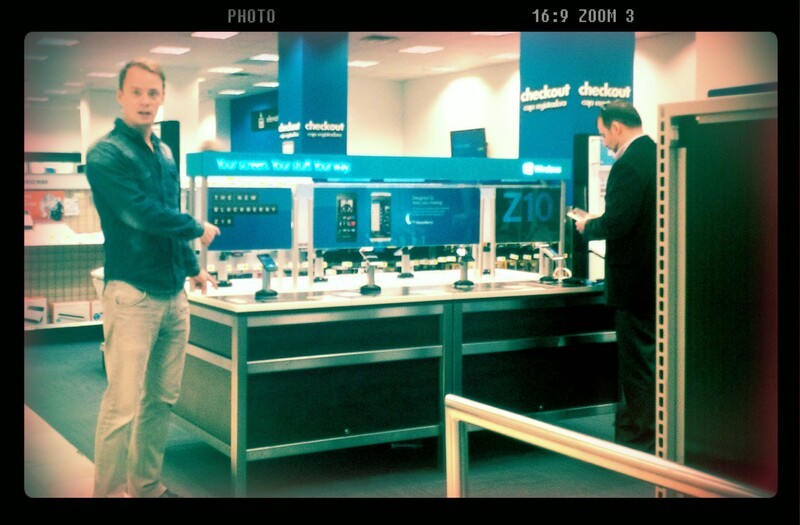 The tale I'm about to tell you is real and occurred literally just minutes ago. Like the real life Made in SoHo BlackBerry 10 story I relayed here on CrackBerry the other week, this one also shows much opportunity for BlackBerry and challenges to overcome.

The triple A batteries in my headphones died this afternoon, so I walked to the nearest Best Buy on 43th and 5th in Manhattan to pick up some new ones. Walking in the doors, I was pleasantly surprised that the FIRST THING I saw when walking in the doors was a display for the BlackBerry Z10. I was also happy to see a customer checking out a Z10. SUCCESS!

The last time I visited this Best Buy that display was not setup, so seeing some Z10 presence ramp up made me very, very happy. So happy in fact that I got David -- our Mobile Nations Design Director -- to go stand by the display so I could grab a photo and tweet it out.

From there we went downstairs, checked out the gadgets, walked back upstairs, grabbed batteries and went to the register to pay for them. On the way out, I saw two more people at the Z10 display, TRYING to play with a Z10. I say TRYING because they COULD NOT TURN THE DISPLAY ON.

On the display were four Z10 units. Two of them were dummy units. The other two were real Z10s. HOWEVER, The Z10 was COMPLETELY UNUSABLE because there was a stupid tie wrap around the middle of the display. After watching the two people try for almost a minute to turn on the display, I got in there and tried swiping the display on myself. After five attempted swipes up and no luck, I grabbed my Z10 out of the pocket and gave it to the two people to play with. After watching them sort of play with it for 30 seconds, I gave them my standard Z10 sales demo.

I showed them how the Hub works, how you can swipe into it from within any app, and showed them how awesome the keyboard was. I answered a few of their questions about the browser, apps and how it compared to other phones on the market (I'm going to save that for another post to get into the details on). From there, it was a done deal. Another Z10 sold. While they went to track down a sales guy, I kept trying to play with this locked down Z10. It was almost impossible to use the phone with that plastic strap wrapped around it.

Overall, the experience made me angry. Had I not been here, this guy would not only have left the store without a Z10, but with a less than stellar first impression of the new BlackBerry. Was it BlackBerry's fault or Best Buy's fault? I'm not sure, and I don't really care... as long as it gets addressed. The Z10 had awesome placement in the store. It was clear there were people INTERESTED in checking out the new phone. But I don't understand the point of putting live units on a display if people can't actually use them. Yes, there's the store demo mode, but in this case it was disabled and the regular homescreen experience was present. And people want to try out a phone before they buy it.

BlackBerry 10 is an experience. To really get it, you need to pick it up in your hands and use it. Better yet, have somebody explain it to you as you're using it and it's even better.

With the store placement I saw in this Best Buy, it's a solid opportunity for BlackBerry. It's the opportunity they need. That said, in this case it feels like it's getting squandered because of a piece of plastic covering the display, which is super lame. I was here to save the opportunity. But I'm not everywhere. I know in the CrackBerry forums I've read other eye witness accounts of similar experiences. As big as CrackBerry Nation, we can't all be lurking in stores every minute to make sure every potential customer receives a great first impression of BB10 (or maybe we can???).

It's 2013. There has to be a better way to display a phone on a shelf that keeps it safe from would be theives while allowing people to fully experience it. Make it happen!