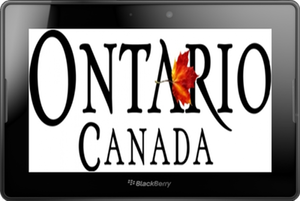 We're rather used to celebrities getting devices ahead of actual release but The Finance Minister of Ontario, Dwight Duncan, gets one too?! Craziness, I say. In any event, Mr. Duncan showed up to take part in the Ontario budget lock-up carrying the yet to be released BlackBerry PlayBook at his side.

When questioned about the device and wheter or not he was getting paid for showing the device off Mr. Duncan replied “I think that we should be very proud of Ontario businesses that innovate.” while that may sound like a closing argument statement he also noted that the budget included an extra $50-million over the next 10 years for the Perimeter Institute for Theoretical Physics in Waterloo, Ontario. The institute of course was founded by RIM co-CEO Mike Lazaridis.

In addition to carrying a BlackBerry PlayBook to the lockup, the printed version of the Ontario provincial budget also features an image of the BlackBerry PlayBook on the front of it. According to the information, Mr. Duncan was so fond of the PlayBook and his budget which concentrates on funding for innovative organizations such as RIM that he wanted to read it off his BlackBerry PlayBook. In the end though, the opposition declined his request.