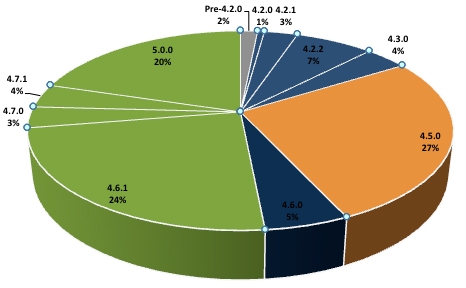 Today our good buddy Al Sacco posted up a pie chart (I'm partial to bar-graphs myself, but whatever works) that shows some very interesting numbers. According to the data, only 20% of BlackBerry users are currently running OS 5.0 (about 8 million out of 41 million users). About 24% are using OS 4.6.1, while the biggest percentage of users (27%) are still on OS 4.5. There are also a huge amount of users running an older, near outdated OS, most likely still just using reliable devices and never seeing the need to upgrade. This just goes to show that even though OS 5.0 has been made available for most devices, not everyone chooses to upgrade their software. Some people like to just stick with what works, and who can blame them? To help verify these stats, we decided to let you have at it and see if the numbers match up. We're thinking that most CrackBerry readers are already using OS 5.0, and honestly, we'd be surprised if that weren't the case, but certainly some of you are running a lower OS version. So sit back, relax, cast your vote in the poll below and lets see if everything jives! If you need help finding you OS version, go to Options > About.