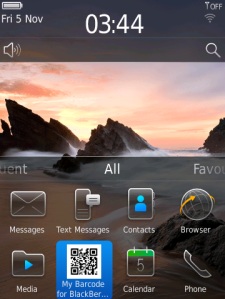 When wanting to add a contact to your BBM list, you have a couple of options available. You could exchange your email, mobile number or, for that “for a fortunate few”, your PIN. Unless you’re lucky enough to have an easy PIN to remember, you’re not likely going to be reciting it on command. When BBM 5.0 appeared, another way to share your contact info became available – barcodes. Now instead of rhyming off a combination of letters and numbers, BlackBerry users can walk up to other BlackBerry users and (in their best attempt to come off as suave and sophisticated) ask them to “scan me”.

While helping out many people in my office get their new BlackBerry set up, I couldn’t help but notice something. Those who knew nothing about BlackBerry still had a bit of difficulty getting their barcode to display (if you’re reading this guys, for the last time, go to your profile, and click on Show Barcode…). I almost wanted to install a screen capturing app to snap the image and set it as their wallpaper. Knowing not to tangle with a newly addicted BlackBerry user, I found another option: My Barcode for BlackBerry Messenger. This simple app simply displays your BBM barcode by effortlessly pressing on the app’s home screen icon. That’s it! It saves time, and a bit of frustration for new BlackBerry users. It’s also practically weightless, only needing a mere 4KB. According to BlackBerry App World, you need to be running OS 6.0 in order to use the app. You can pick up My Barcode for BlackBerry Messenger for free from BlackBerry App World.

More information/download of My Barcode for BlackBerry Messenger