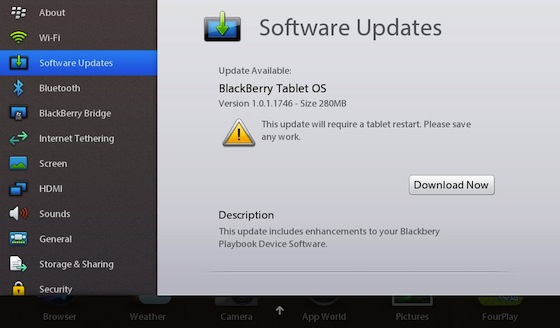 * Update from Kevin: So it seems Adam's PlayBook is posessed. He downloaded the .1746 update as shown above, but it wouldn't actually install on his device. Now he's even seeing .1758 available for download, but same thing, it won't install. So these are updates that are NOT AVAILBLE to all right now. Not quite sure what's going on here. So for now .1710 is still the latest official available. *

Just this morning we saw an official update to OS 1.0.1.1710 for the BlackBerry PlayBook, and now it looks like another update is available as well. OS 1.0.1.1746 is showing for some users as an OTA update now. I did say I wouldn't mind having an OS update once a day, and having two in one day isn't so bad either. No word of what's new in this version, so check your device for available updates and then head into the forums to post your findings.