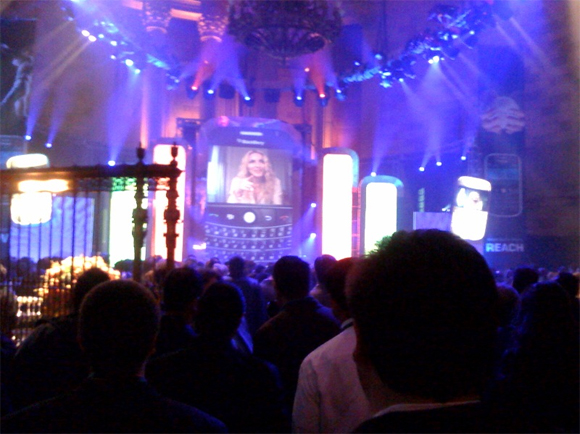 As promised in our last podcast, my co-host in crime Craig Johnston attended Thursday night's NYC AT&T Bold Launch party and has reported back with images and some notes from the event. The highlights? Michael Phelps was on hand to give a short speech, Madonna chimed in with a video address to the crowd, and everybody in attendance received an IOU for a Bold. Many more pictures and details after the jump!

The promise of free food and a free Bold brings out the crowds!

After an hour of standing in line, Craig finally made it in.

Olympian Michael Phelps had a crowd to talk to!

Good times being had by all.

A shot of the back of the hall.

Madonna addresses the crowd via a gigantic BlackBerry Bold

Another shot of Delta

It's never a good sign when the device that's launching isn't yet ready/on-hand to be given away at its debut party. Thought it sorta makes sense that the Bold wasn't handed out just yet when you take into account the AT&T Bold delay reasoning we posted last Friday. Let's hope it launches the first week of November (even sooner would be a bonus!) and beats the Verizon Storm to market by at least a couple of days. It just seems wrong if it doesn't pan out like that.

HUGE thanks to Craig for reporting back to us CrackBerry Addicts. At least he was one of the few in the crowd rocking a BlackBerry Bold, even if it was a slightly-cursed one from Rogers.