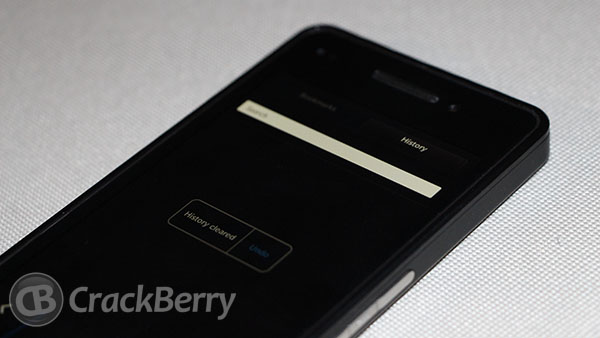 With the path RIM has taken in building the BlackBerry PlayBook OS and BlackBerry 10, it allows them to go ahead and keep everything their customers love about their current BlackBerry devices and bring it over to their next generation computing platform.

In addition to that, it also affords RIM the opportunity to go ahead and improve upon many things that the previous OS had limitations with. We've seen plenty of that in action already, but now we're getting an even closer look at some of things they'll be vastly improving upon with BlackBerry 10.

One of the improvements on that list is directly related to how BlackBerry 10 handles system dialogs and notifications - those little pop-ups that happen on your device to let you know when things are happening. All those buttons, windows and yes, even error messages, are getting revamped using toasts or, more specifically, Cinnamon toast and French toast.

'Toasts' themselves aren't anything really new. Some app developers used them in their BlackBerry OS 6 and OS 7 applications previously and other OS' make use of them as well. With BlackBerry 10, they'll become part of the core OS and open up several new functions along with adding to the overall visual styling of BlackBerry 10 as a whole.

Back in May we posted some documentation pertaining to how BlackBerry 10 would make use of notifications and the lockscreen. In that documentation, a system called Cinnamon Toast was highlighted as being one of the new and significantly unique additions to how dialogs and notifications are displayed on BlackBerry devices.

In the same vein, some new documentation posted by N4BB adds a little bit more to the explanation. Essentially, as a notification comes in you can tilt the device slightly to view more info, then again for another line of info, and so on until all the info is displayed accordingly. For example, a text message comes in, you can tilt the device to see who sent the message, then tilt more for the message itself.

Perhaps the most interesting piece of info on this new documentation is the fact that the actions are reversible. In other words, if you pick your device up and look at the info and then proceed to put it down, the info you revealed will be once again covered back up in real time to keep it out of sight when it is not really needed or intended to be seen.

"A SystemToast contains a message to display to the user. You can display a message to a user that will time out and disappear after a preset amount of time. This approach provides users with progress information and allows them to continue with the application after the toast times out."

They even provide some sample code for you to make use of, just in case you want to go ahead and create your own.

To add to the already publicly available information, N4BB posted up some further guideline information highlighting how french toast is to be used within the system. It addresses the placement, length of time which the french toast should show, and specifically highlights the deletion of items as a use-case scenario. Stuff developers should already know, but still interesting to see laid out.

As noted, this is available on the BlackBerry 10 Dev Alpha so looking at the image above, you can see I deleted the browser history on my device and instantly a toast appeared on the screen letting me know two specific things:

The dialog, as per the guidelines, is supposed to stay there for a period of 3 seconds allowing you to go ahead and reverse the action taken. Delete that email and need it back, you can do it. No extra apps needed because it's now built into the core OS that is BlackBerry 10. Something, I might add, that Google is only now adding directly into their GMail client for Android. I'm just saying.

Overall, all of those things combined are nice additions to the OS and shows that RIM is paying attention to even what some may consider 'small things'. Now, we'll just have to wait a bit longer before we can get our hands on it.

I've said before and likely will say it again as well, there is much more to BlackBerry 10 than what RIM has shown off thus far and it's only going to get better as we get closer to the actual launch date.