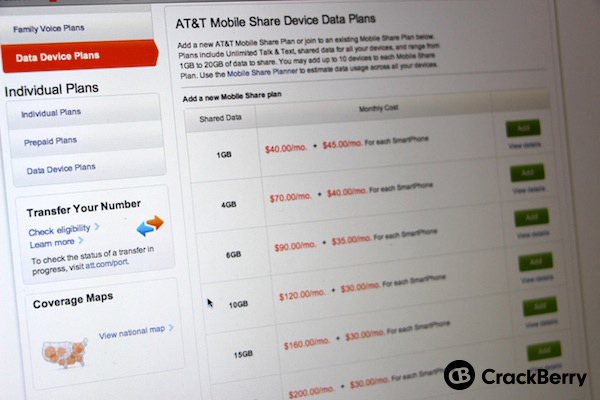 The question has come up over and over (and over) again -- do you need a BIS plan (aka BlackBerry data plan) from your carrier to use a BlackBerry 10 phone? The short answer is no, you don't. You can use a standard data plan with BlackBerry 10 devices and everything will work just fine. Pre-BlackBerry 10 devices required a dedicated BlackBerry/BIS plan to get all features working - BBM, browser, email etc. On BlackBerry 10 however, you can just use the same smartphone data plan that works for iPhone or Android as well.

There are a few catches here however. Yes, you can also use a dedicated BlackBerry plan with no problem. That means a full-out BlackBerry data plan, no an individual feature plan. Plans that feature segmented data streams, like BBM/email only or "social plans" are currently no good on BlackBerry 10. So if you're swapping over from another platform, BlackBerry 10 makes things easy in that you don't even need to swap your data plan with your carrier. If you're currently on a BlackBerry plan you are good to go as well.

Remember too that if you're coming from an older BlackBerry or a different platform, you most likely have a full size SIM card that won't work in the BlackBerry Z10 or BlackBerry Q10. So for that you will need to hit up your carrier to get a new SIM card. (You can cut down your current SIM, but we don't recommend doing that - at all) While you're there make sure your plan is up to speed since the new devices offer LTE - so if you have an older plan/SIM you will want to upgrade.

Update: Rogers contacted us and told us that for BB10 devices you don't even need a BES plan to connect to BES10 - only older BBOS devices require a BES.

Hopefully that clears things up, but just to refresh:

The whole data plan story surrounding BlackBerry 10 has been a little under communicated and a bit confusing, so if and when any of these things change we'll be sure to update this post.