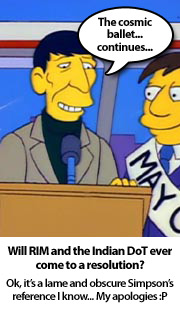 Yesterday, RIM and Indian officials met to discuss the governments' security concerns that email sent via a BlackBerry device can't be traced or intercepted.

From all of the news reports I've read thus far, it looks like there is no news of a resolution. But I'm not surprised. RIM appears to be standing firm on their stance that no 'master key' is available to decrypt messages sent from a BlackBerry device. It appears as though this is an unacceptable answer for the Indian government, and my guess is the 'pressure machine' has been turned on to see if they can squeeze out a resolution somehow.

The Indian government is extremely scared of attacks from militants and terrorists, and they see the BlackBerry as a potential security risk that they need to monitor. While they're at it, why don't they monitor all incoming and outgoing phone calls as well? Or perhaps talking is the problem. Maybe the government should tape everyone's mouth shut so that it would be harder to communicate? Oh, wait... then they could just use the BlackBerry to communicate their ideas.

This is getting silly.

I can only hope the 2 parties come to a reasonable solution in the near future. This 'saga' has been going on for months and months now and it's time to put it to bed. I'll stay on top of this one as always and keep you posted on any developments.

RIM has apparently been offered an ultimatum from the Indian Government. Either provide a 'master key' or BlackBerry service will be discontinued within the country. RIM has also been notified that their Thursday meeting will have been the last, unless they can provide a way to meet their demands. If RIM stands firm as they have been, this could be the end of BlackBerry service in India. Click here to read the full story >