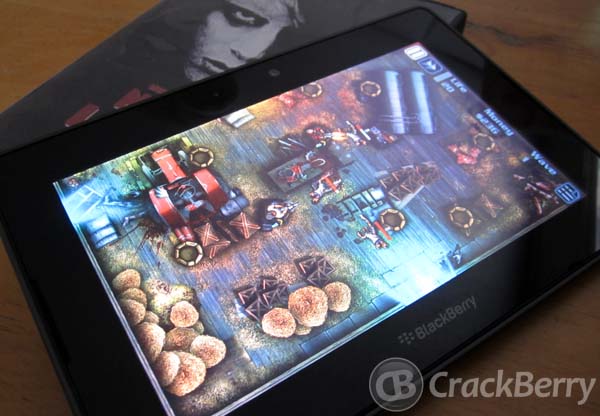 They're coming for you Barbara.
There are a lot of awesome games coming to the BlackBerry PlayBook, and my new addiction is Night of the Living Dead Defense by Marmalade. From the same creators that brought you GRave Defense HD, this one is based on the classic horror movie by George Romero, Night of the Living Dead. Featuring sound clips from the movie as well as images and music, the HD graphics are well done and play smoothly on the PlayBook. Fight off wave after wave of zombies with 12 different gunners each with their own specialty. Four different difficulties and campaign and survival modes ensure that you will be playing this game for a long time to come.

Gameplay Features:
Night of the Living Dead Defense is $1.99 in BlackBerry App World. If you're in to zombies or defense games, you will definitely want to check it out. Just be prepared to get addicted from the first level, so set aside some time to play.