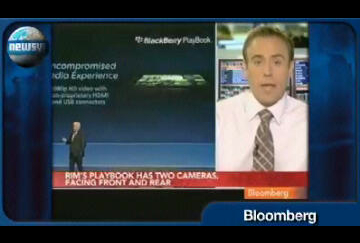 Newsy, the multi sourced news service has recently released their BlackBerry application. Now available in BlackBerry App World as a free download, BlackBerry users can get caught up on the latest news through the daily video short clips offered by Newsy. As mentioned in the press release:

“In addition to the enormous success of our iPad, iPhone and Android apps, we continue to meet mobile users’ demand for quickly understandable and relevant video news with the Newsy for BlackBerry app,” said Jim Spencer, president of Newsy.com. “We’re bringing Newsy’s superior mobile experience to a much wider audience.”

Offering fresh snack-sized videos including world, business, sports and entertainment, the Newsy for BlackBerry app is a perfect fit for the growing number of BlackBerry users around the world seeking on-the-go news.

Having used Newsy on my iPad I can say it certainly offers a different look at the news. Rather than the reporters offering only their take on the matters at hand, they take all the mainstream media outlets opinions and presents them to you. BlackBerry App World states support for all devices but, other sources say it will only work on 5.0 and above. If you download it, let us know which device you're on in the comments. I tested on my BlackBerry Torch and it worked fine with the exception videos do not play in landscape mode.
Source: SMSEO
NEVER GONNA GIVE YOU UP NEVER GONNA LET YOU DOWN