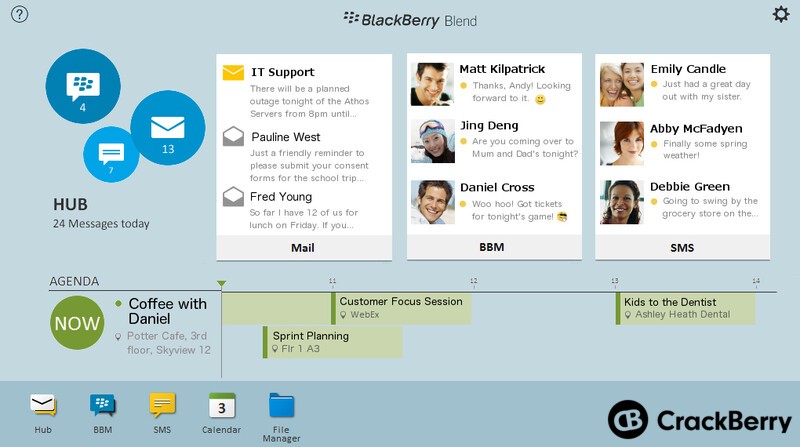 We've seen a couple BlackBerry Blend retail demo videos since the app started appearing long ago but another one has now been dug out of OS 10.3.0.1052. In fact, everything about that OS is technically Blend ready right down to the desktop component actually launching on Windows and Mac but it's still locked out because it doesn't fully download. No matter though, at least we have a new video to watch.

Digging through the files a bit more shows BlackBerry Blend will bring the Hub, BBM, SMS, your Calendar and even the device file manager to your desktop or tablet and while it was thought to be a BlackBerry Link replacement at some point, that doesn't seem to be the case at all and it will instead, work alongside BlackBerry Link.

So, desktops and tablets. Which desktops? Well, Windows and Mac are supported and as for tablets, the documentation notes iPads and Android tablets. Sorry, no mention of PlayBook is laid out specifically but I don't want to toss away all hope so I'll say it does include support for NFC pairing as well as barcode scanning, so maybe there's something there. Maybe.

PS: It's still not official so alas, things could change but the good news is it doesn't seem as though it will be an Enterprise only thing at all. Everything here shows it'll be available to everyone.