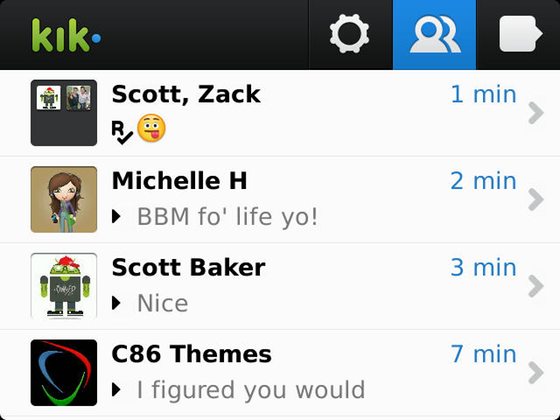 Well, it's been quite a while since we've last heard from Kik on the BlackBerry front. But now, a new super secret build has popped up and unlike the last time this news was passed around -- this time, it REALLY is a new and improved build. Push is indeed working fine but it's not making use of RIM's push services, instead it's opening a connection to Kik's servers to get the message out and you'll find a new UI within the app and for the most part, it appears to also be compatible with BlackBerry 7 devices.

We'll leave it up to you all if you wish to proceed in downloading it, Kik has gone ahead and addressed the issue with it scanning your address book so that it now asks permission first, which you can decline. That of course, was seemingly RIM's biggest complaint about the app when it was removed from BlackBerry App World.

One other thing to note, is that the app is not signed by RIM so it will ask your permission to basically do anything. That includes accessing the web, changing your profile pic and more. Act fast, I have a feeling Kik may not keep the link alive long.