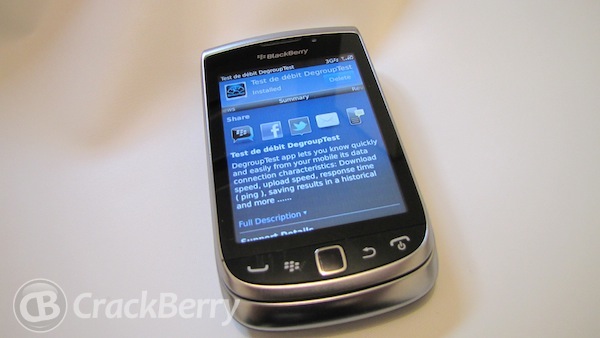 I must admit, it isn't very often I browse through the 'latest apps' section of BlackBerry App World and get excited about a new edition with no reviews. However, today was an exception as I spotted an application called Test de debit DeGroupTest (roughly translated to "Throughput Test") which appeared to be a speed test app that works over both WiFi and 3G. This is something I am currently lacking from my collection of apps.

The developer is clearly French and the majority of the wording within the app is in French but you don't have to be a rocket scientist to figure out how to get the app working.

And work it does -- it shows your download and upload speed as well as your ping, plus the center tab at the top of the app will take you to a results page, much like the more common known speed test app on virtually every other platform.

If there is another speed test application for BlackBerry that tests both WiFi and 3G I haven't found it yet, so although this one may be brand new and in its first edition, you may well want to check it out. With continued developer support this one could be quite well a beauty.