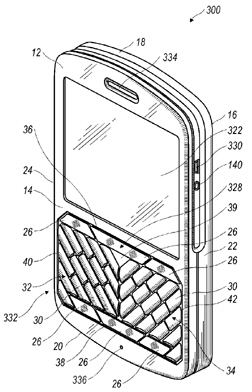 While all the rumors of late are that RIM is working on a touchscreen device (again, these are still rumors..I have yet to see any concrete evidence other than mock ups), our friend Russel just found a new RIM patent app in the USPTO database that shows a CRAZY looking Angular keyboard on a mobile device.

The Patent, entitled Angular Keyboard for a Handheld Mobile Communications Device (go figure!) features a keyboard in which the

It will be interesting to see if a design like this will ever actually get made. It does maximize keyboard space and make for big buttons that should provide for a lot of striking room (thanks to the angular design maximizing each key's strokeable area)...but there is precious space between the keys. For those of us BlackBerry users who have typed on both the BlackBerry 8800's keyboard (big buttons, no spacing in between) and the Curve or 8700's keyboard (small keys, bigger spacing in between) I think the latter is the greatly preferred choice. Either way, it is always good to see our RIM engineer's thinking outside the box (err...inside the keyboard?). What do you all think? Yay or Nay?