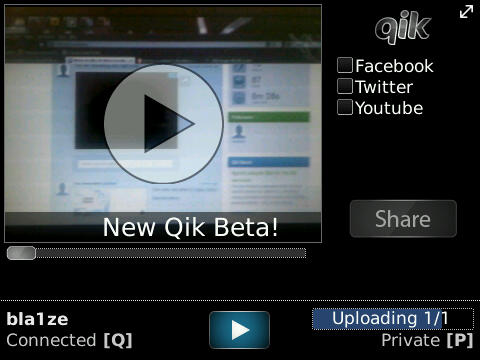 It has been quite some time since my intial post of Qik coming to the BlackBerry platform. Since then time, we've not really heard much from Qik in the way of updates. Even today, the version made available for BlackBerry devices hasn't even evolved into 1.0 yet, as it still remains sitting at version 0.1.15. With that little bit of history out of the way, I can say I was rather surprised when a longtime friend dropped me a message to say that version 0.1.17.2 was the current beta build being worked on by the folks at Qik.

Sporting a revamped UI and presumably more device support (I tested it on my 9700) the new Qik beta actually looks nice. They seem to have managed to make the application somewhat 5.0 compatible from what I can tell and while it still seems to actually have issues with streaming, it does manage to shoot, then upload videos just fine sometimes. Other times it turns out to be just a black video. Ideally, I'm sure we'd all actually like to see it actually stream from our devices as it does on other platforms but right now, I'm settling on the fact that they are still working on it. Anyone out there still want to see a Qik client for BlackBerry? Leave your thoughts in the comments.