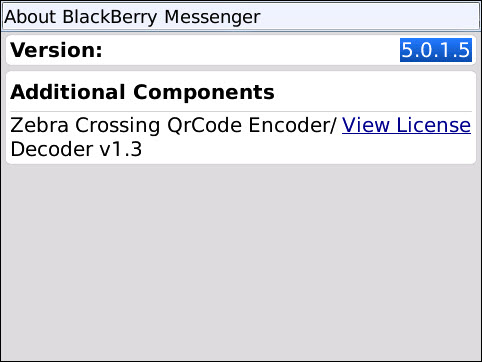 After a short delay from the initially scheduled release, Research In Motion has just sent off emails with links for BlackBerry Messenger 5.0.1.5 to some in the BlackBerry world. The changes overall seem to be back end work that has no impact for users visually. A few things have been added that users might notice however. Keep in mind not all beta testers were sent the release today and more will be sent out later. We got some screenshots and explanations of what's new after the jump

First up, we no have the option to adjust how contacts and groups are displayed. Not stylistically but rather 1 line or 2 line. Two line now shows bigger expanded sections for BB Groups while leaving it at 1 line now hides contact avatars or reduces their size if any are set, assumingly to speed up how BlackBerry Messenger works.

Previously the option was available to auto accept voice notes. The new addition here is that now, when you decide to send a voice note to a user, if the above box is chosen the voice notes recorder launches within BBM in a better styled interface which allows you to send your voicenote.

SMS Contact integration in BlackBerry Messenger has been worked on as well. While it's a little to early to say how well it's working over previous versions, it does show that RIM is aware that it's not the best at the moment and does indeed need to be fixed up.

There you have it -- we're sure there are a few other things we're not quite seeing yet so, if you've spotted something feel free to let us know in the comments. If you're among those still waiting to get in on the beta, don't feel so bad. It's not as if it's a huge overall to BlackBerry Merssenger that everyone will want. Quite frankly, it just looks like BlackBerry Messenger of past.