Following the new batch of BlackBerry "Athena" renders arriving on TENAA, it would seem as though we're now getting the first live look at the BlackBerry KEYone successor, which could potentially be called the BlackBerry KEY2, according to the images and well, logical deduction. 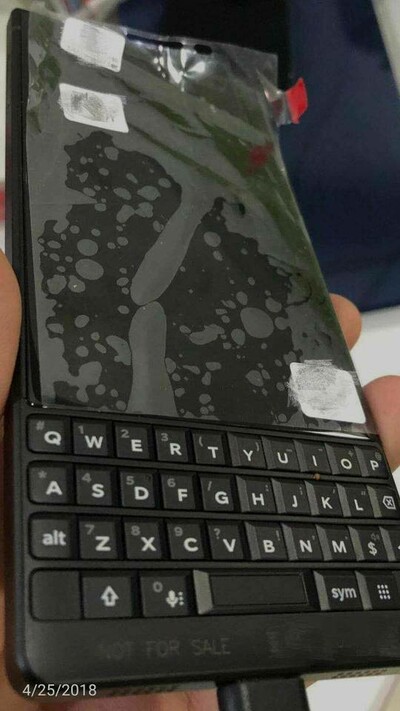 The first image, as it was posted in the CrackBerry Forums, shows off the new keyboard design previously spotted on the renders but this time around we can see that common keyboard frets are gone, and instead of the glossy keys from the KEYone, we're looking at matte keys, something I had hoped for as a change.

The keys do look slightly larger and a little bit flatter as well putting it close to the Passport keyboard styling, which many enjoyed. Also, up for debate right now in the forums, is the addition of a new key to the keyboard, another item spotted on the renders which now show to be likely accurate.

Other images appearing on the web have the same image as above more cut off to show less and hide a few bits but, they also show what off what is assumed to be a photo taken with the device, wherein the bottom left corner, there is a watermark that highlights 'shot on BlackBerry KEY2'. Now, to be clear, there are several apps on the Google Play Store that can replicate this functionality right now, so I'd certainly not bet all my chips on that when anyone can make their own custom photo tag, but it is a logical naming convention to use and has come up multiple times previously.

In any case, it would seem as though things are heating up and we're certainly getting closer to seeing a KEYone successor be released but given we have no backstory or timeline here, we have no idea how old the device shown off in these images even is. The first batch of renders told one story, only to be followed up by a new batch telling a different story, so it goes to show you, nothing is official until it's official. But alas, sound off in the comments and let me know what you all think.