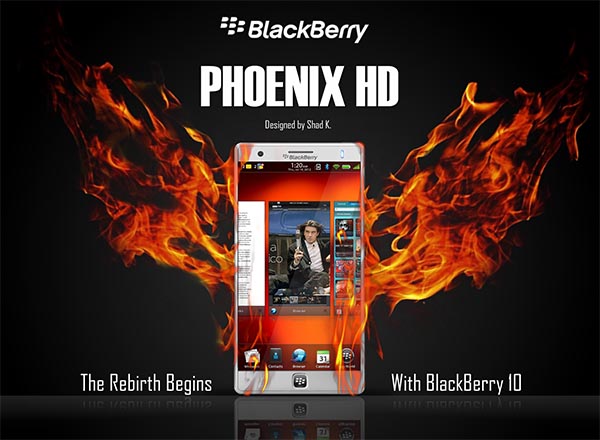 There is no shortage of speculation regarding the upcoming BlackBerry 10 devices. When is it coming out? What will the specs be? What will it look like?? Everyone has their guesses for each of these questions, and some of our readers go the extra mile and draw up some concept designs for the new devices. We've had quite a few DreamBerry designs sent in, and here are 3 new ones.

The first is the BlackBerry Phoenix HD, sent in by CrackBerry member Shad. This design looks similar to the current BlackBerry Dev Alpha device, with a few notable exceptions like the trackpad with the BlackBerry logo. I like the whole concept, with the name of the device being tied into the slogan "The rebirth begins with BlackBerry 10". Nicely done Shad!

The next two designs might not sit well with everyone, but keep in mind they're simply artist renderings having a bit of fun with some 'what if' questions.

The first is by Michal Bonikowski. He's come up with a BlackBerry Windows Phone, based off rumors that Microsoft might be interested in purchasing RIM.

This BlackBerry concept runs Windows Phone 8 and get a full touch smartphone with some elegant capacitive buttons at the bottom and a very interesting camera integration at the back. The texture at the back of the phone is very good for grip and the phone is crazy thin, as shown by some of the pics below. If I were to guess some specs, I’d say this model has a 5 megapixel camera, a 1.2 GHz dual core processor and a qHD screen, at least.

There’s a camera button in here and probably some typical BlackBerry business and communication apps. LTE is also on board and I expect the Xbox gaming and BBM action to fit together brilliantly.

The last concept was designed by Bob Freking and shows a custom interface dubbed Berry UI running on top of an Android OS. This design is quite a bit more elongated than other BlackBerry smartphones we've seen, which provides ample room for a 3 inch screen as well as a full QWERTY keyboard.


Various widgets resembling BB OS are included and a couple of UI modifications to make BlackBerry users feel right at home. The handset comes with a 3 inch screen with a 480 x 640 pixel resolution and 266 ppi density. Also on board there’s a dual core Snapdragon S4 processor and an 8 megapixel camera with 1080p video capture ability. Under the display there’s a BlackBerry button and a QWERTY keyboard, that I first though it was a virtual one, but it turned out to be physical.

So what do you think of these designs? Any of them look like something you'd be interested in buying? Any particular elements jump out as something you'd love to see incorporated into the real BlackBerry 10 devices? Let us know in the comments below, and for more information and pictures of the last 2 devices you can hit the source links below.