You’ve been standing in line for 15 minutes and 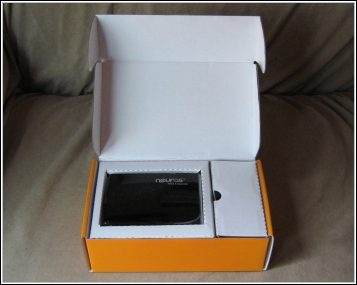 there’s no end in sight. Your kids are bored and, to the delight of the people around you, after 72 verses of the Wheels on the Bus Go Round and Round, they’ve grown tired of singing. But now they’re fighting with each other. And complaining. What if you could hand them your BlackBerry and let them watch an episode of Curious George while you wait?

You can, and it’s easy to do with the Neuros MPEG4 Video Recorder 2. This fun little digital wonder captures video onto your MicroSD card for playback on your BlackBerry. Now you can record your favorite movies, TV shows, and home video and watch them while you commute on the train or wait around in the airport.


The video recorder box itself is fairly straightforward. There are hookups for power, video in, video out, and a slot to hold your memory card. All the recording options are set using the included remote control and onscreen menus on your TV. Controls for recording a program are pretty much like VCR controls, meaning that you can either hit a button and start recording now, or you can schedule a timed recording. The recorder also allows you to view still photos on your TV or listen to MP3 audio files through your stereo.

Front and Back or Recorder

The Neuros Record 2 takes several kinds of memory cards including Compact Flash, 1″ Micro Drive, MS Duo/Pro Duo, MMC, and SD Series. But as a BlackBerry owner, the one you care about is the SD card slot. Using the SD Adapter sleeve that came with your MicroSD card (you did keep it right?), you can drop your memory card into the recorder. The card slides in with the contacts facing up, and will stick out of the recorder a little bit when it is in place. This caused me a little confusion at first as I tried to insert the card face down, but a quick check of the manual got me back on track.

The Neuros recorder lets you set the recording resolution and quality. The manual suggests that the 320×240 resolution works well for most devices. There’s of course a trade-off between video quality and file size. The 320×240, 176×120, and 640×480 modes record in a 4:3 aspect ratio. The 368×208 resolution setting is used when recording from video sources that are in wide screen (16:9) format, which you could use for playback on wide-screen handhelds like the Sony PSP.

Once you have something recorded onto your MicroSD card, simply pop it into your BlackBerry and you can immediately start watching it. It’s as simple as that. There are no conversions to be done, you simply select the file you want to watch and play it.

The image below is from the Pearl playing a movie that was recorded at the lowest resolution and lowest quality. The movie was very watchable at this resolution. Some people would prefer that it take up the whole screen, but to do that you would need to record at a higher resolution. Alas, playback on the Pearl at higher resolutions was slow and choppy as the processor struggled to render everything.

Playing a Movie at Lowest Resolution

The BlackBerry 8800 had an easier time rendering the video. The clip below was recorded at 320×240 resolution and playback was smooth on the 8800.

The Neuros Video Recorder 2 is a great way to get videos on your BlackBerry. The different recording options let you tune your video resolution to get the best playback on your device. With video, it’s apparent that the faster the device, the happier you’ll be with watching your videos, since you’ll be able to record at higher resolutions. Of course, you’re going to need a big MicroSD card (or perhaps several) to hold all that data. But now it’s possible to carry a video library with you on your travels.