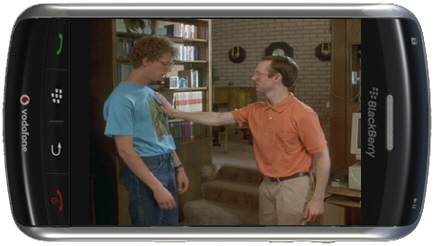 ** UPDATE: Well, Boy Genius apparently has taken some serious offense to this post. None intended at all. Myself, CrackBerry.com and the CB community love the BG! Without him we'd have wayyy less to blog about, talk about and dream about.  But he's got his inside source, we've got our inside sources, and those sources have conflicting information.


As for the 'ninja' thing -  We've known for a few weeks now the details on the Thunder's keyboard based on several insider reports, we weren't referring to the commenters, just that once it was out in the public via comments our sources we're cool with letting word out -- until that happened we had to keep it on the dl.  Fair point, though, we'll stop with the 'ninja' stuff.

As for the AT&T thing, you're right, uncalled for. That came from one of our sources (another RIM guy.. maybe friend's with your guy?!) but it really didn't add any value to the post so it's not worth having. My bad.

Anyway, bottom line is that we're still excited for the Thunder and, as BGR notes, the expected release on Verizon looks like November, plenty of time to hammer out any bugs there may (or may not) be. Hugs all around? **

We've gotz a NERD FIGHT going on here. Haha. Yesterday we posted on the BlackBerry Thunder's touchscreen keyboard, putting forth some info that has never been heard before, namely:

Our buddy the Boy Genius put up a post this morning that puts forth the notion that bullet point three can be scratched out, at least for the time being. BGR says:

[...] we’ve been told that the unit is nowhere near being able to enter production, let alone being released. Here’s a quote: “Thunder is in no way shape or form market-ready. If Bold was any indication, Thunder won’t be ready for at least another 4-5 months.” Our source goes on to tell us that the keyboard is incredibly annoying to type on, and the screen actually shows ripples even when pressed ever-so-lightly. There is an accelerometer in here, but it goes “bonkers” when the device is moved. In its current state, the UI blinks and lags when you try to scroll, and for every key press, you have to wait half a second until you get a response. Our guy, when talking about haptic feedback, said that the screen “clicks.” We were informed there are “buttons” on each corner, so when you press the screen, you might feel one click, two clicks, or four simultaneously. We’re told these four independant buttons actually press, so you do “click” the screen. RIM implemented a touch-and-drag approach which is the only way to select on screen buttons at this point. We were also told this was the latest build of the software, and to quote him, “Most of the people who have handled it thinks it’s a joke.”

As for just how good the Thunder experience is/will be, I guess we'll find out! Yesterday's story came not on the tip of just one ninja, but no less than three that have used it - but it's also possible that one ninja's "amazing implemention" could be another ninja's "this thing sucks".

I just followed up with one of our reliable ninja's who has spent quite a bit of hands-on time with the Thunder, who's taken issue with a couple of the BG's points (he thinks maybe it's a bitter AT&T ninja, sad to not have the Thunder coming to their carrier, who was the source of info). This ninja pointed out to me that BG's description of how the Thunder's haptics work doesn't make any sense for a smartphone, never mind a company like RIM that puts a premium on keyboard functionality. Push come to shove, utilizing "four buttons in the corner of the screen" in the aim of acheiving localized touch feedback response just wouldn't cut it, not even close. It also seems the statement that "RIM implemented a touch-and-drag approach which is the only way to select on screen buttons at this point" doesn't actually make any sense.

Regarding production, while we have heard that it's getting set up for production, we by no way stated that meant full-production or release is coming anytime soon. Production means they're getting away from the first gen hand-builts and into a pre-production prototype run.

What isn't disputed in this butting together of Nerd Heads are the details - Haptics, Full Qwerty & SureType entry, and.... we've got some more info for you today coming via yet another ninja:

So there you have it - the GEEK Update on the BlackBerry Thunder, as best as we can nail it down today. I sum it up like this : the aspirations are set high, the ground work is laid out, but it seems RIM has some work left to do to bring it altogether and WITHOUT DOUBT they are hustling to do so. Here's a another summary that's perhaps more apropos to this nerdfight: "The board is set, the pieces are moving..."

Ding Ding. This Round of the Nerd Fight is over!