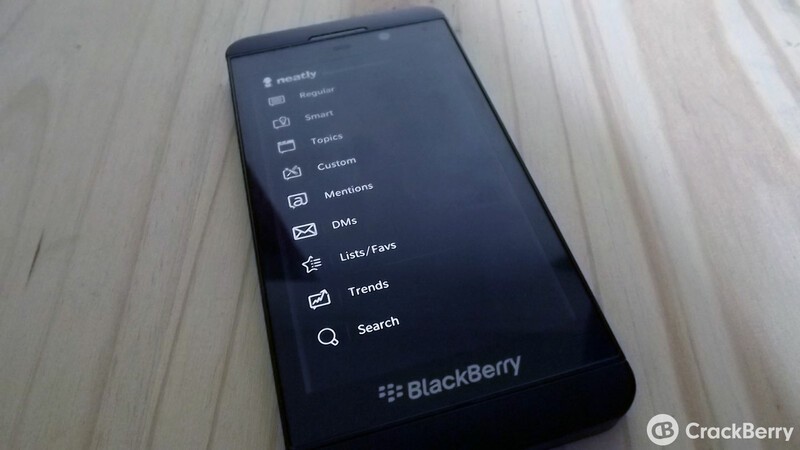 If you own a BlackBerry Z10, you'll know the Twitter for BlackBerry 10 isn't up to par as with previous BlackBerry operating systems. I had never really used the T4BB much and swore by the Scope App. However, with Scope not available for BlackBerry 10, I had to look elsewhere. Thankfully there are options out there, one of which comes in the form of an app called Neatly.

While at BlackBerry Jam Europe 2013, James managed to sit down with the developer and get a quick demo of the app. Of course, we like to give you a full review so follow me after the break to see Neatly in action.

The Neatly app went through a recent update that changed the look of things from when I first started to write the review but the app still delivers in many more ways than the default Twitter app. When you first load the app, you are presented with many different options to go through your Twitter timeline. With these many different options, it is probably best to go through them one by one.

I'm using the Neatly app more and more now for my Twitter needs, only using the official Twitter app to respond to tweets as it gets push. I can't say I use the Smart function much. It is certainly not a feature on top of my list for a Twitter client but it's nice touch nonetheless. What I've noticed is that it loads up more newsy type tweets as I tend to click on those more to open links.

As I mentioned before, I swore by the Scope app on my previous BlackBerry devices and was pretty upset when I realized it wouldn't be coming to BlackBerry 10. Not that there was official word on it but it had not been updated for a long time. One of the things I loved about it was that I could create lists. I know there are lists available via Twitter but I preferred to make them within the app and it had a dedicated tab for it too. I looking for another Twitter client to do this and while Neatly does offer lists and the Custom option, I don't feel it works as well. But it's early on and perhaps we'll updates that will allow it to be more refined. For example, I'd like to have an option within the users profile that allows me to add them to a list to custom timeline. If this could be added, it would be golden. I also love that the ability to add tweets to Read Later is available. When I am in a rush, I always add links to Read Later and since there isn't one where I can do it from the browser, as you can with BBOS, having it in a Twitter app is godsend. That's another notch to its belt, for me.

There are however a few bugs that need to be stamped out. It doesn't seem to handle lists created for hashtags very well at the moment and when creating lists with people, not everyone I select gets in there. If I try to add them again, some will be added but I can't seem to get everyone I want to a custom list. I'm hoping these issues can be fixed with future updates. Another gripe is that the timeline doesn't seem to update regular. There is a refresh interval but it doesn't seem to work. Even when I have the app running as an Active Frame. So, I have to always manual refresh. I'd also like to see it load up more than 100 tweets every time it refreshes. If I've not checked my timeline for a few hours it doesn't load from the last read tweet, only the last 99/100. I hope this can be increased.

I'd recommend the app over the official Twitter one right now. It certainly offers more and has the potential to be an awesome Twitter client. It is going in the right direction for the features I look for and if the bugs could ironed it would be ace. While it is not free, I find it worth the price tag right now.