The future that Near Field Communications (NFC) promises is nothing short of astounding. However, the obstacles lying in the path of that future are just as great. NFC is honestly nothing new; as a technology, NFC has been around since 2004. In 2005, Cingular (now AT&T) installed NFC point of sale readers as a test in Philips Arena in Atlanta. They were confident that by 2010, over half of the wireless phones in the US would support NFC. Today, there are but a handful.

It's only in the recent past that NFC became something of a hot topic. As to why, I can't help but think that it has something to do with money. Mobile payments will be the driving force behind NFC adoption in Europe and North America. The other uses of NFC - Bluetooth pairing, smartcards, file sharing - just aren't important enough to design into a smartphone for the masses. At best, the features would seem gimmicky; at worst, unnecessary.

But paying for food; clothing; and Wal-Mart with your phone may very well become a thing. A great deal of the hardware required to do this is already in place; it's all thanks to that little chip that might be in your credit card right now.

The Progeny of RFID 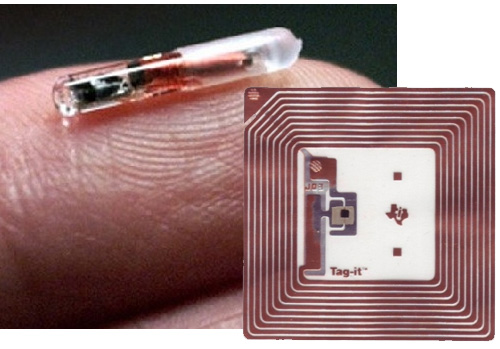 In many ways, NFC has its roots in Radio Frequency ID. In that technology, a passive sensor is bombarded with radio waves from a reader; it uses that energy to send back a plain-text string of numbers. RFID is used in a number of places like tracking pallets at Wally World (Wal-Mart to some) and tagging animals - both wild and domestic.

The next evolution of this radio frequency technology was the smartcard. Unlike RFID chips, information on smartcards is not sent in plain-text. They contain chips capable of both sending and storing information with a high level of encryption. Smartcards are used in high-security government and corporate applications, transit ticketing (like the Clipper card used at BART stations), and payments. That credit card that lets you do contactless payment at McDonald's? That's a smartcard.

Until NFC, these radio frequency solutions have consisted of passive sensors. A reader sends out a pulse of radio energy that the chip uses to send back a response. There is no power source in these chips, only a rather long antenna. NFC integrated into a smartphone brings the passive chip and the active reader into one package. More than that, the process becomes more dynamic and more secure.

What NFC can do for you

Harkening back to its RFID ancestry, NFC allows you to read NFC tags. Oftentimes these tags are in the form of stickers that can be affixed to any number of items. Posters with the stickers could point you to a movie's website. Tagged items in stores could give more information about themselves. In short, NFC tags work similarly to QR codes, though there's no camera to worry about focusing "just right."

As mentioned before, smartcards can easily be emulated by the NFC technology found in a handful of Android devices, two BlackBerry devices, and a rumored iPhone device. The Bay Area Rapid Transit system uses the Clipper Card - a smartcard - to ticket and charge its customers for the ride. The cash balance to these cards can be added at kiosks located around the stations. With an NFC equipped smartphone and an intelligent app, users could add money right from their phone.

Pairing two Bluetooth devices is easier that it once was, but it's still slightly complicated. NFC offers near effortless pairing of devices. Simply tap a Bluetooth device to your phone and the two are paired.

Pay with your Phone

This is the most important part about what an NFC-equipped smartphone can do. Not necessarily because it's the most powerful feature, but because it is money and commerce that will drive NFC to become more readily adopted. Without banks and merchants behind the technology, NFC will go no where.

Fortunately, a great deal of the hardware is already in place. Those contactless card readers you can sometimes find in stores today are certainly compatible with NFC systems. Smartcards - like that chipped credit card - are arguably more secure than a simple magnetic stripe, and I can see a future where mobile phone payments are even more secure than that. Logging in to an app or entering a PIN on-screen would be yet another way for banks and card issuers to verify who exactly is making this purchase.

And as much as I would like to believe otherwise, that image up there is a fake, a bit of Photoshop trickery. They're aren't any widespread NFC mobile payment options for BlackBerry... yet.

We carry so many cards around with us. Some cards are used to purchase things. Other cards are used to gain access to secured areas. NFC aims to reduce that multitude of cards you carry down to zero. With all of those functions carried out by the NFC technology in a smartphone, all you need to carry with you is that device.

NFC, though more than a half-decade old, can still be considered an emerging technology. There's been precious little adoption in the mobile payments sector and thus very few phones actually support that functionality. But the times, they are a' changing.

With more mobile devices supporting the technology there will be more demand to make use of it. Increased demand will cause the technology to appear on more phones. Which will increase demand which.... You get the idea.

NFC and mobile payments go hand in hand. Where one succeeds, the other will soon follow. And with it, comes all the gimmicky, geeky goodies that NFC promises to bring.

Sources: Near Field Communication: A Quick Guide to the Future of Mobile, How will NFC get its piece of the $4 quadrillion payments pie?, RFID Tags and Contactless Smart Card Technology: Comparing and Contrasting Applications and Capabilities [PDF]