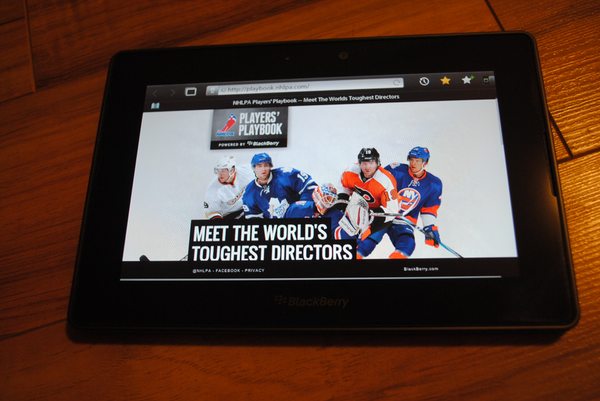 If you've watched any NHL games recently you likely noticed a small influx of BlackBerry marketing happening and that's not simply because Jim Balsillie longs to own an NHL franchise. No, it's because RIM is amping up their marketing and as new CEO and President of RIM, Thorsten Heins mentioned -- they know they need to work on such things.

Recently a portion of the NHLPA site was dedicated to five players, including Anaheim Ducks winger Bobby Ryan, Toronto Maple Leafs winger Joffrey Lupul, New York Rangers goaltender Martin Biron, Philadelphia Flyers winger Scott Hartnell and finally, New York Islanders forward Michael Grabner. Those five players will be participating in the NHLPA Players PlayBook where they capture all their events on a BlackBerry PlayBook and post them or as the tag line goes:

Move over Hollywood—5 players are moving behind the camera for an all-access look at their lives off the ice. From the dressing room to their living room and beyond, The NHLPA Players’ Playbook delivers exclusive videos shot by the NHL players themselves.

If you head on over to the site, you can sign up but full access isn't being given right away so we have no idea if there is an app or something along those lines to go along with the promotion but if you refer people either through Twitter, Google+, Linkedin or Facebook you can gain early access to program. That said; we expect a lot more of this marketing to come from RIM in 2012 -- it's the sort of thing they need to have in place.