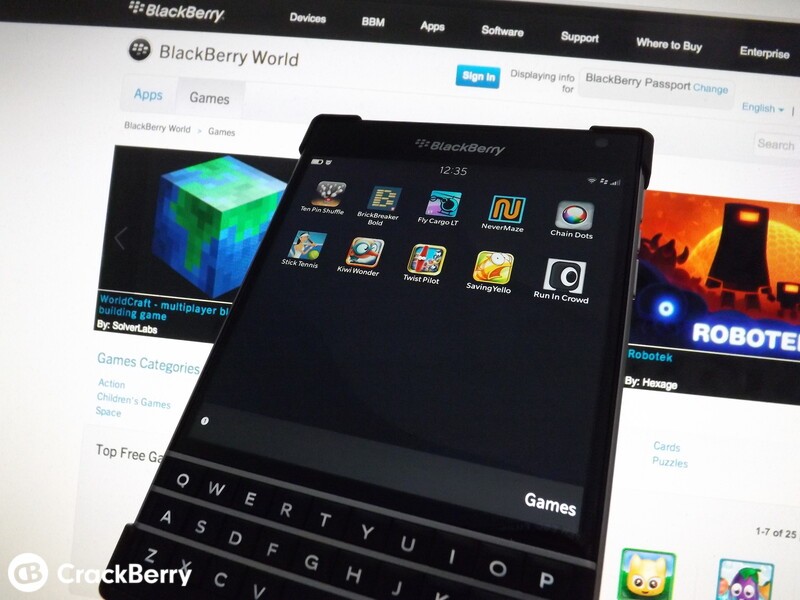 When it comes to games, what you will like very much varies from user to user. Although the BlackBerry Passport is portrayed to be a business device and of course it serves that purpose beautifully, you'll also be pleased to hear that gaming is also great on that whopping square display.

Although I don't tend to spend an awful lot of time playing games (apart from reviewing them) there are certain ones that I like to have on my BlackBerry for when times of boredom set in - such as in the doctor's office or on a train journey.

So for you folk that are picking up the new BlackBerry Passport I thought I would put together a quick list of 10 of my favorites that work perfectly on the Passport.

We've featured them all before since BlackBerry 10 hit the scene so if you want to see them in action you can click the links to check out the original posts of which many contain a video.

And as you can see from the screenshots below they look pretty sweet on the Passports square screen.

The concept with NeverMaze is very straight forward - the app will auto generate a maze and you need to maneuver the orange icon to the purple one. The graphics are pretty basic but the colors complement each other well and although I'm not super excited about this one myself it is a little addictive.

The game play is smooth and although lacking any background music (which may have been nice) the game may also be a great one for the kids. The developer states that there are billions of mazes available so you will more than likely never see the same one twice which is a nice touch.

BrickBreaker - an old classic got a revamp for BlackBerry 10 and what a beauty it is. With the BlackBerry Passport there are two control options. Option one is to just touch your character and drag him in the direction you wish him to go. And because of the hardware keyboard in place on these devices you can also use this. Just hit up the 'Q' and "P' keys for left and right. On the intermediate level though you have to use the keyboard controls - a wee bit harder.

There are normally a ton of bowling style games on any mobile platform. 10 Pin Shuffle is the best I have ever used and I've been around the block. The game is a perfect example of how great gaming is on BlackBerry 10. It brings us stunning smooth graphics and even some pretty realistic sound effects. If you want a great game then this one is worth a look for sure.

But you don't just get one game with 10 Pin Shuffle - there are three within the game and I'd urge you to check it out.

Chain Dots is a beautiful, simple, puzzle style game which will be perfect for when you have a minute to kill. I say a minute as that's how long each game takes.

Once you start Chain Dots you are presented with a grid of colored dots and its just a case of drawing a line between adjoining ones that are of the same color. This can be done in any direction and in reality there are no limits in terms of how many dots you may get in the chain. The longer the chain - the more points you earn and its all about how high you can score in 60 seconds.

There's a whole load of different tournaments to choose from with Stick Tennis and initially you will be given a short tutorial of how the controls work. They are really simple though - serving is achieved by tapping the screen and then a second tap to hit the ball. After that, returning shots is all about swiping. You can swipe in any direction - the only downside here is that when performing an upwards swipe you need to get used to not swiping the phones bezel or it will minimize the app back into its Active Frame.

With decent graphics are VERY realistic sound effects Stick Tennis is a gem. Go and have a go yourself. I bet you will agree with me.

Kiwi Wonder is a simple concept - where your kiwi soars from left to right collecting coins and bonus items - but avoiding other birds, which will kill you.

Controlling your Kiwi is achieved just by tapping the display to make him go up, and then releasing, where gravity will pull him down.

The graphics with Kiwi Wonder are absolutely stunning, as is the background music which has a kind of Hawaiian style to it. From start until finish the game is a real joy to play. Give it a go and see what you think?

With Twist Pilot you control Phil who is a red.........thing. Phil likes to collect the gold rings but what he doesn't like is bumping into the walls in the game or the nasty spiders. In fact he makes a rather comical noise when that happens. Where things get interesting and puzzle like is that due to Phil being a funny shape he can't fit through all the gaps - unless you wait for him to rotate. He is constantly spinning you see and when you come to a tight hole you will need to ease Phil through when he is at his thinnest point.

First to hit the BlackBerry PlayBook the premise of Run in Crowd is actually quite straightforward - run and jump. When you start the level you and a few other gamers are in the same position, but that quickly changes as you are forced to run as the world gets faster and faster. You will want to keep an eye out for obstacles and large voids in the games world. The longer you run, the higher your score as well as the bigger bragging rights when you see yourself as the number one on the worldwide leader boards.

Fly Cargo is another game that was first out on the PlayBook. The aim of the game is to fly your helicopter around the screen picking up cargo and delivering it its destination point. Sounds simple - it isn't! Things are slightly different on the Passport due to the screen dimensions but it still plays beautifully.

There is both a free version and a paid one if you get addicted - which you probably will! I LOVE this game.

Saving Yello gives us everything thing we want from a game. Superb graphics, great sound, fantastic game play and even a cute little character that you control. The aim of the game is to get Yello (who is a goldfish) into his fish bowl. This is achieved by using a kind of catapult style movement, much the same as we have seen with the likes of Angry Birds.

Once you touch Yello you move your finger left and right to select the direction and then move back and forth to choose the power level of the shot. Release your finger and off he goes - simple. However, things get a little more tricky after the first level.

That's my top ten that I chose to download to my Passport for when I'm in a gaming mood. There are a couple I wanted to include but after loading them up they just don't work properly and clearly need updating to accommodate the Passport. In the meantime there's still a huge selection to choose from.