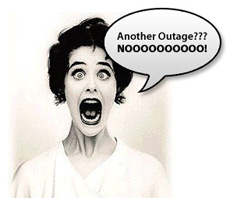 Outage, failure, interruption, chaos, near death experience - call it what you will, but its all we've heard about all week.  For Blackberry users, Monday left us feeling like a toddler with no Spongebob.  Thought of "Why! Why?" and "What in the world is going on!" flowed through our heads.  We cried to each other, and to those who could have cared less, and waited it out (as we had no other choice) and hoped for the best.  RIM took an unscheduled day off and we felt like the world was coming to an end.  Local news agencies were all over the story (I live near NYC, so it was fairly big news) and even my mother (who doesn't even own a contract phone) called me to ask if my precious 8830 was working.

No one has yet discovered the real reason for the outage, but many have speculated in their own ways.  The most important revelation that most of us could have ignored before Monday is that at some point in their travel through cyberspace, all emails coming or going from any Blackberry device have to take a detour through RIM's network operations center in Canada.  The problem isn't with Canada, its the fact that everything needs to cycle through one specific location at one point in its travels.

Frank Gilman, the chief technology officer for Los Angeles law firm Allen Matkins, was forced to deal with the outage Monday afternoon. "What surprised me was the apparent lack of a solid business continuity plan on RIM's part to ensure reasonable connectivity," he said "A company that is marketing devices that increase the mobility of professionals should have systems and contingencies in effect to avoid an outage of that size and duration."

RIM will have to fess up at some point as to just what happened - be it "upgrades" as some say, or just plain overload.  The company is blaming "a problem with an internal data routing system within the BlackBerry service infrastructure that had been recently upgraded," according to the statement.  Obviously as the Blackberry nation grows, upgrades are a necessity, but someone must have flipped the wrong switch this time.

For anyone wanting more of an explanation, this is the best RIM can offer: "Once again, RIM apologizes to its customers for any inconvenience."