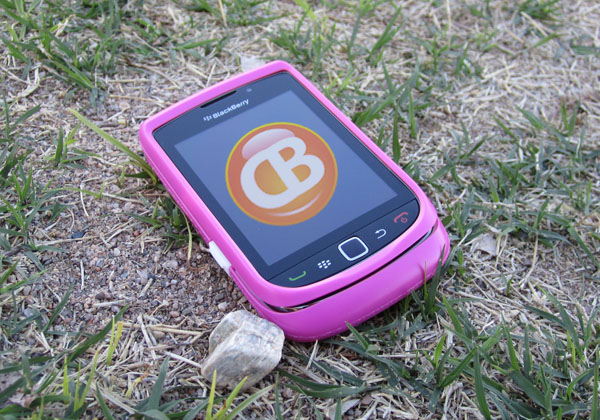 I wanted to share with you guys my personal journey. No, it's not mind blowing or earth shattering but rather a little insight into my love/hate relationship with BlackBerry cases. Maybe you or someone you know can relate to my story. And to help you with your case issues, we're going to give one lucky reader their choice of OtterBox case for BlackBerry! Check out the contest details at the end of the post.

I got my first BlackBerry about three years ago. I use T-Mobile, and chose a Curve 8320, my GoldBerry, and I was hooked from day one. I had no clue how to use it, and still remember the first time I tried sending a picture via BBM, and how confusing it was. After having my BlackBerry for a few weeks, I began to see little scratches on the battery cover, and decided I should try to do something to protect my new little friend from further damage. I headed to the mall and hit up the T-Mobile store (at the time still quite naive to accessories and how to find them cost effectively) and ended up with a black skin case that hugged my Curve and gave me a little peace of mind.

Anyone familiar with the first Curve series knows that battery pulls were a way of life, and crucial to keeping the dreaded hourglass off my screen. (Again, this was before I knew what I know now, aka alt + shift + delete to reset.) I wasn't fond of having to remove the case what seemed like constantly to pull my battery, but I knew it was the prudent thing to do if I wanted to keep my device from having any more blemishes. Time went on, and for the most part I kept to the plan and Goldie kept her skin on.

By this time the BlackBerry Bold 9000 had been out for a little while, and my want for one prevailed. When I finally got one (thanks Bla1ze!), I didn't have a case for it. The leather battery cover seemed to hold up to daily wear and tear better than the plastic cover of the Curve, so I wasn't too worried about it. I'm somewhat embarrassed to say that my initial resolve to keep my devices wrapped safely in rubber had been tossed to the wayside. Our good friend Jared had even sent me three skins to use on the Bold 9000, but it just didn't feel right anymore and I fell out of the habit of using them altogether.

I had come to realize that I prefer my devices as naked as the day RIM had made them. The feel of the chrome and leather of the 9000 felt good in my hand, there was no denying it. Skins, pouches, holsters, hard cases and soft, I tried them all briefly on various BlackBerry smartphones that followed the Bold, but just couldn't stick with any. I decided my devices were destined to be bare, and I was happy with that choice.

Fast forward to present day, and my BlackBerry Torch. Having never used a Storm,  this is my first touch screen BlackBerry. While getting accustomed to the weight and feel of the device, as well as the slider portion and inset keyboard, I never once thought about covering it with a case. It was a thing of beauty, and I wanted those that saw it to be able to appreciate its magnificent form. Plus the battery cover is textured, which made my grip more secure.  I'm fairly klutzy, and though it doesn't happen often, I admit I have dropped my BlackBerry on more than one occasion. The Torch was no different, and soon, my bezel was chipped, and a corner had a tiny dent (though I'm sure I am the only one that would notice).

Guess what happened next? I was given an OtterBox Commuter Series Strength case. So many mixed feelings came packed in that glossy pink box. I was actually almost dreading having to use the case. I told myself I would just use it for a day or two, long enough to give it a fair evaluation, and then tuck it away and put it behind me. I snapped it on - first the inner rubber piece, followed by the hard back shell. This was kind of hard as the shell fits tightly on the phone and getting the rubber piece to cooperate and stay where it belongs was a challenge. After it was on though, I saw the value of making it on the difficult side: it won't easily come off when you need it to stay put the most. The front piece snaps on much easier, but granted there isn't a lot to cover on the slider part of the Torch so that makes sense. I turned my Torch over a few times, examining the new look and feel, and honestly thinking it wasn't as bad as I had initially thought it would be.

A week later, I realized I still had the OtterBox on my BlackBerry. Realistically, that makes sense to me. The case doesn't make the phone, it's there to seamlessly integrate with your device. If I had noticed it, the case wouldn't have lasted so long on my Torch. I found the real value soon enough, while walking through the park with the kids. Carrying too many things in my hands, and distracted by our daughter almost running me down with her bike, I felt my BlackBerry slip from my hands. I felt that familiar feeling in my stomach and cringed hearing it smack the concrete sidewalk, face down. It bounced back up, phone going one direction and front piece of the the case flying off the other way. Expecting the worst I surveyed the damage and was amazed to find none. Not a smashed screen, not a ding, not a scratch. Even though the front piece had been knocked off, it had done its job. As I snapped it back in place, I shook my head and smiled, understanding finally why people have a love for cases the way they do.

In closing, let me just say that though I understand why I should always have a case on my BlackBerry and I'm thankful for the scuffs that are on my bright pink case and not on my device, I'm not making any promises. The OtterBox is great, and I have definitely learned to appreciate its qualities, but some days I get wistful for the feel of that shiny chrome and textured battery cover in my palm and revert back to my old ways. What can I say? I live dangerously.

Contest: We want to hear your story. Do you love cases, and have a stack of them you rotate through? Do you have one tried and true case that you return to time and time again? Maybe you've never used one, but always wanted to. Leave a comment below, telling us your story (just don't ramble on as long as I did) and you will be entered to win an OtterBox Commuter case, like the one I have in the pictures above (your choice of color). One entry per person please. Contest ends this Sunday at Midnight PST. Good luck!

For more information on OtterBox and their line of BlackBerry cases

Additional photos of the OtterBox Commuter Series for Blackberry Torch