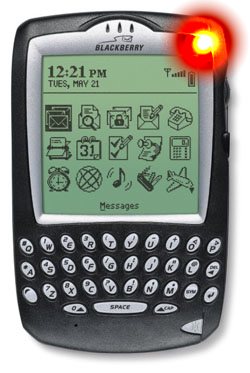 Back in 2005 I had my first experience with a BlackBerry. I don’t recall the model, but I do remember it having a green screen with black text, and a thumbwheel. It looked similar to the above, which is a BlackBerry 6710.

Ah, those were the days… In March 2007, I joined CrackBerry.com, right in its infancy, literally. The website, along with the forums was growing rather quickly, and word was spreading, including the new name, ‘CrackBerry’. By mid 2007 I wouldn’t be caught dead without my BlackBerry. If it wasn’t in my hand, it was on my right hip. I hardly ever used it for calls; it was used mainly for emails, and BlackBerry Pin Messenger or as it is known today, BBM. Being an addict was one thing, but admitting it was something else. I was already a CrackBerry addict, albeit, I hadn’t admitted it yet, but there was not an ‘official’ name till CrackBerry.com came along.

A short while after joining the CrackBerry.com team, I did an interview with Fox News on the day-to-day use of a BlackBerry. This included the effects of constantly using it, home life, work life, and paying attention to the ‘red light’ for notifications. Back then, I was using the BlackBerry 8700. It was a rugged brick of a device, it just simply worked! If I rightly remember, that was the FIRST colour screen device that I owned, and boy did it look GOOD!

Well, spring forward to June 2009; I being a gadget nut that I am, decided to try my hand with the Apple iPhone 3G S. Besides being a gadget lover, and always wanting to try a device for myself, I really wanted a gadget that had fast browsing speeds. And that’s where Apple and the iPhone came into play.

CrackBerry.com, as you know, is very well known for sharing the latest details and information for ALL BlackBerry smartphones, and their respective carriers. In addition to the support that is offered via the Forums from the general public. Thus, I won’t go into details about the differences between the BlackBerry and iPhone, except this: THERE IS NO RED, GREEN or BLUE LIGHT ON ANY APPLE IPHONE!


This has to be the main feature that I missed during my defected time with an Apple iPhone. From time to time I’d be working at a user’s desk [I work in I.T. Technical Support], when I’d return to my desk I’d have no choice, but to pick up my iPhone to check for messages\notifications. The joy of a BlackBerry is within a 15 minute or so window, if you receive any notification you can have it set to show a ‘red light’. This is good for viewing your device from a distance; in the dark; in discrete, etc.

Since I’ve been back home, all I’ve done is played with the thing, during which time I realize how much I actually missed the ‘red light’ of notification, and even the blue one for when I’m connected to Bluetooth in my car. It really is the simply things that make us happy, and this for me is it. What for you is a MUST have feature, no matter the device that you’re using?