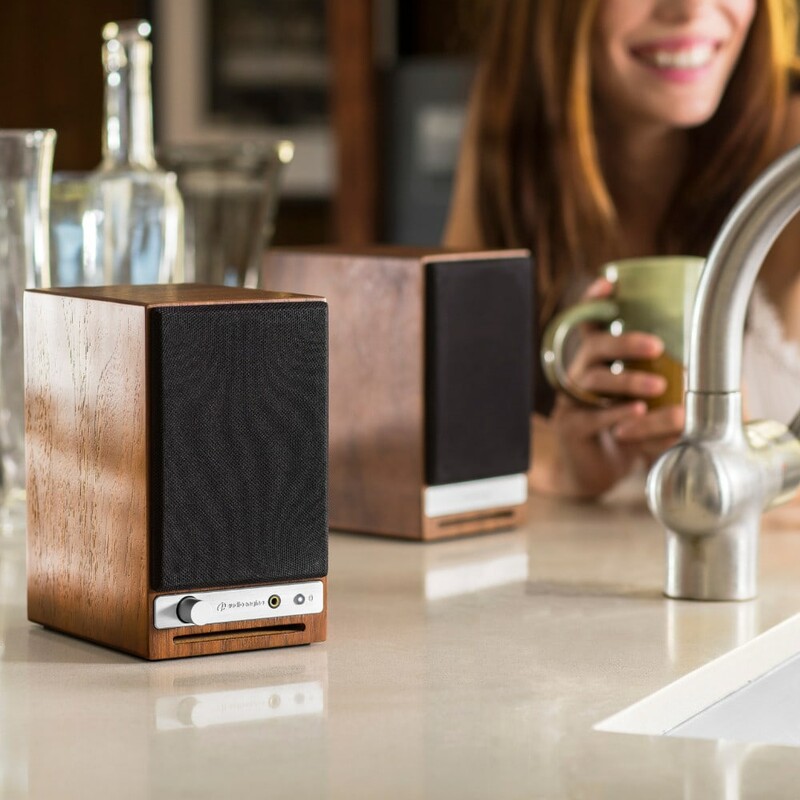 I'm a man of simple needs, though admittedly sometimes expensive ones.

When it comes to my technology, I want it to work seamlessly in my life. If it works perfectly with the default configuration, that's great. I'm also more than happy to tinker with the settings to find the perfect balance.

When it comes to speakers and headphones, I want clarity. I want to hear exactly what's on the recording. Not artificially boosted bass, not excessive loudness. I want to be able to put on music I've listened to a hundred times and go "nice, I didn't hear that before" when a nuanced passage is played and a subtlety catches my attention. I'm not an audiophile dropping thousands of dollars on custom enclosures, but I want what I hear to sound good.

And when it comes to interior decoration, I take a somewhat minimalist approach. I generally prefer to have as few things out as I can, and I loathe to have cables stretching all over the place. And the fewer things I can have to accomplish more, the better.

All of this has come to a head on my desk since I ordered my first Amazon Echo Dot some six years ago. You see, the first-gen Dot's speaker was… mediocre. Which is to be expected in such a small enclosure. I knew this going in, but I had a plan: just plug it into the surprisingly decent Creative A250 2.1 system on my desk. Problem is, that's also what my computer was plugged into (itself running through a USB DAC hooked up to a USB hub plugged into the back of my monitor which was finally connected to my MacBook… all so I could limit the cables going to the laptop).

Fighting to make this work

My perfect world goal: two audio sources seamlessly and invisibly feeding into one set of speakers. I want to be able to take calls and video audio from my computer, but also call on Alexa for my calendar and weather and music as well.

Cheap little mixers or automatic audio source switchers weren't that much of a thing at the time, at least that I could find. So version one was a bit more manual than I would've liked: a physical switch to toggle between inputs. I mouned it on the underside of the desk alongside the DAC, so I could easily adjust the volume and switch between my computer and Echo with ease.

Or so I thought. It didn't take long before I yanked out the switch. The Echo Dot sat pumping out mediocre-sounding responses, but at least it worked. My dream lingered for a while, eventually replacing the Echo Dot with a newer 2-gen Dot with pretty decent audio quality. It wasn't going to win any awards, but for playing me the latest from NPR it did the trick.

Two audio sources. One speaker setup. How difficult could it be, right?

And then I thought my salvation arrived: the big 'ole Amazon Echo Studio. This bad boy featured a bunch of stuff I liked, like having multiple drivers and a woofer, but also an audio input jack. Huzzah! I thought this setup would be great!

Except, it's not. There's a delay in waking the Echo Studio from an external source, and since I'm not one that listens to music when I work I found that I was missing notifications and the start of sentences all the time as I waited for the wake-up to occur. And even though my desk is pretty large, the single-point nature of the Echo studio made it awkward to place if I wanted to have the sound coming from roughly right in front of me. I ended up wedging it behind my right monitor, and though it was close to the center, I could still tell that I was getting more audio from the right than the left.

And most frustratingly, the audio input didn't sound good. The DAC only output over stereo RCA, and the Echo Studio's processing of that basic signal was muddy and heavy on the bass. My boxes were not being checked here.

Upgrading to the Audioengine HD3 monitors and S6 subwoofer

I try to fight my expensive tastes. But in doing so I often end up spending more on mediocre solutions along the way than I would have buying the good thing the first time. But along that way I also learn more about the options out there and what exactly I want in a comprehensive solution. I often end up on the expensive thing in the end, and I appreciate it even more for having gone through the not-exactly-what-I-want in the meantime.

So one day earlier this year I was on a video call and the Echo Studio was doing its thing, producing muddy audio that was making me question the quality of my own hearing (it's still excellent, it turns out). And then the damn thing rebooted in the middle of the call. Thankfully I know how to work my computer and switch around audio outputs quickly, but that was the last straw. Just over two years I had fought with this thing, and I was done.

I immediately started the search for the next office audio upgrade, determined that this would be the last for me. No more fighting on middling solutions, no more mediocre audio quality, no more messing about with switches and DACs and all that. I want it all and I want it in one package.

Okay, technically this came in two packages. I landed on the Audioengine HD3 desktop stereo monitors as my speakers of choice. These compact bookshelf speakers are more than just a set of drivers in a box; they feature some smart guts and a plethora of input options. Important to me, I could run a USB cable straight into the onboard 24-bit DAC (it's micro-USB, but as I only had to plug it in once that's okay with me). It also accepts inputs via a standard 3.5mm audio cable, stereo RCA, and Bluetooth. Importantly to me, it runs them all at the same time. So I can hook it up to my computer over USB and use that 3.5mm input to connect to the original Echo Dot (welcome back, friend) and play music on my computer while also querying Alexa and getting a response from the same speakers. This is the seamlessness I wanted from the start.

The audio quality of the HD3 is truly excellent, with a balanced and rich tone and broad frequency response that's what I want to hear. It's not the best ever, but it's more than good enough — especially at this price. And supplementing it with the Audioengine S6 subwoofer helped round out the sound profile with thumping bass when it's actually called on. And for when I want to plug in my headphones for some concentrated and isolated audio work (like editing a video) then there's a 3.5mm audio out jack right on front.

The Audioengine HD3 checks my boxes better than my other convoluted setups. It's simple. It just works. It looks good. And it sounds great.

My boxes are checked here better than they've ever been. The audio quality is solid. The way it meshes with my expectations of seamless behavior and source switching is just perfect. the only part where I want to knock off some points is in the cable management, since there are now four cables coming off the back of the main speaker (power, USB, subwoofer, Echo) and unnecessarily high up on the box, but since they all quickly dive behind my desk and are usually out of sight I'm not too upset by it.

This is my solution. It's pricey, especially since the subwoofer effectively doubled the price, but it. just. works. After years of fighting with cables and DACs and splitters and speakers and Alexa, I've reached my peace. And my peace sounds goooood.