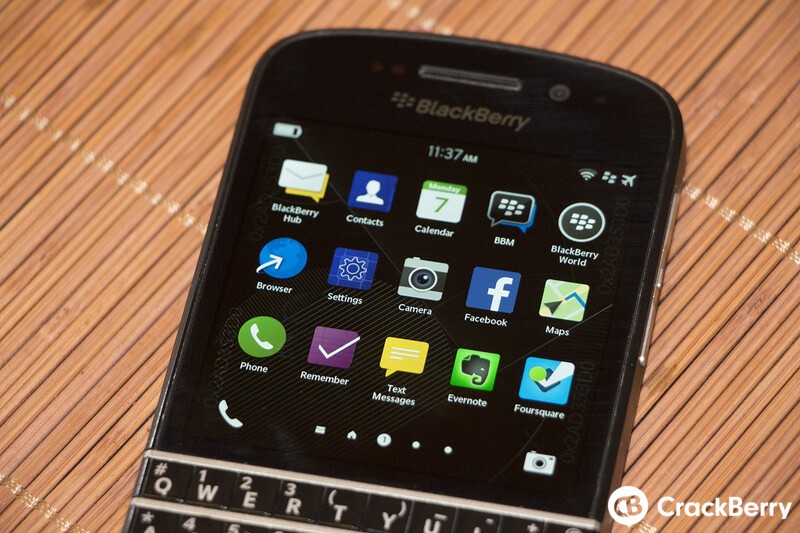 While some folks aren't entirely happy with having to wait a bit longer to get their hands on 10.3, it is important to clarify that everybody will get 10.3. You'll just have to wait a little bit longer for an official release. For the truly impatient, there will probably be leaked versions also.

As mentioned, there are a few leaked OS versions in the wild. These are works in progress, with varying states of functionality. I use 10.3.0.296 as my daily driver even though it has some issues, but your mileage may vary. Use caution and realize you're riding the bleeding edge. Don't be upset if things don't work perfectly.

Double-Finger Swipe Down From Any App To Load Settings Menu

So you're reading some news, and you realize you want to turn on Wi-Fi. Previously you'd need to swipe up from the bottom of the screen to send the active app into the active frame view, then swipe down from the top of the screen to load the quick settings. No more, friends! Simply "double-finger" swipe down from the top, in any app or window, and voila! There is the quick settings menu!

I participate in numerous mailing lists. Typically email list administrators become very irate when you post html-formatted messages. Now I can select plain text format in the hub when writing a reply, and I can finally stay active on mailing lists even when I'm away from my computer. Compose a new email, tap the overflow icon (three dots), and select Plain Text format. Bonus!

Transparent Active Frames Show Which Apps Were Running After Reboot

A new feature added in BlackBerry OS 10.3 is known as 'Advanced Interactions'. What are they? Well, it allows for setting such as 'Lift to wake your device' and 'Flip to mute' along with 'Flip to save power'. They're all pretty self explanatory but lift to wake means your device will wake up when lifting it from a flat surface while flip to mute will silence your phone when you flip it over. Finally, flip to save power will help conserve battery life by putting your device in standby mode when you put it face down on a flat surface.

This feature provides a speedy method to apply actions to emails, directly from the hub view. Of all the things I've discovered in 10.3, this gets the most use on my device, and I do hope that it is expanded in future releases to include more actions. Go into the hub, tap the overflow icon (three dots), then Settings, then Display and Actions, and scroll down to Speed Triage.

There are two email action fields, and you can map them to file an email, flag an email, or delete an email.

Back in the Hub, tap the "three horizontal lines with check mark" icon in the top right corner:

Although purely a cosmetic addition, it shows the developers are in touch with users' desire to customize their device and make it a personalized reflection of themselves. In System Settings, go to Security and Privacy, then Lock Screen.

Do you have an email folder you just added, and you forgot to toggle folder synchronize? Now you don't have to dive into account settings to change it. Tap the "down arrow" at the top right corner of the hub next to the hub or current folder name, navigate to the folder you want to edit, select it, tap the overflow icon (three dots), and tap Enable FolderSync.

Option To Show Sender Only, On Lock Screen Notifications

I prefer my BlackBerry to be locked down tight. If I accidentally leave my device behind somewhere (mind you, when is it not in my hand or in my pocket...) or it is stolen, I do not want the person holding it to have access to anything on the device. So full lock screen notifications are definitely out. However, what if only the sender was shown? This is a nice compromise that might work for some users. In system settings, go to Security and Privacy, Lock Screen, and scroll down to the toggle shown below.

In a nod towards a clean user interface, you can now toggle the display of action bar icon labels. Go to system settings, Display, and scroll down to the Action Bar section. If the labels are turned off and you are unsure of an icon's function, simply long press on the icon to display its label.

No more decisions about which apps are going to be categorized in small folders. Now you can stuff as many app icons as you like into a folder. New pages are added inside the folder as required.

So there you have it. Eleven small features in 10.3 that might otherwise be relegated to the margins of some design summary document. They deserve to be front and center, because it truly is the little touches that make all the difference in the user experience.

That said though, it's important to keep in mind all these things were taken from a pre-release OS so some potentially could go missing before final we release. I certainly hope not but the warning is still applicable.

Are you running a build of BlackBerry 10.3 on your device? If so, let us know in the comments what your favorite features are thus far.