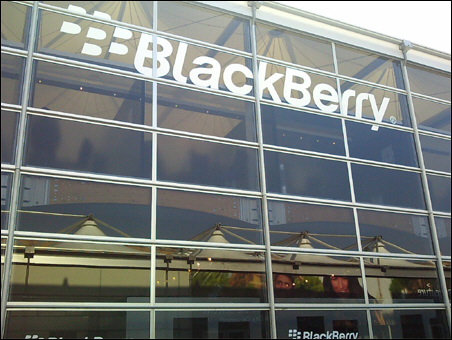 Dieter is on location in Barcelona this week attending the Mobile World Congress, and it seems he has managed to stick with Espresso and keep himself away from the Sangria as the stories are still coming in. Following up on his hands-on look yesterday at the BlackBerry Application Suite running on an HTC Touch Pro, Dieter has this to say today:

Sure, they have a booth where you can check out umpteen BB vendors, but the real action appears to be happening at BlackBerry's courtyard building, where they have a bunch of meeting rooms where a bunch of business people are learning a bunch about BES 5.0

The stakes are actually higher than you might think for RIM at MWC. Overseas, Nokia is far and away the dominant force and Microsoft does much better with Windows Mobile than they do in the states. If RIM wants to extend their enterprise dominace into Europe and beyond, they had better make sure they schedule plenty of meetings in this glass box.

Nokia? Who's that?!! lol. Sounds like CrackBerry Nation is going to have to up its game and start thinking on how to become CrackBerry World! You can follow more of Dieter's MWC coverage here and if you want to see his thoughts and insights between blog posts, you can follow @backlon on Twitter. Keep the reports coming Dieter!