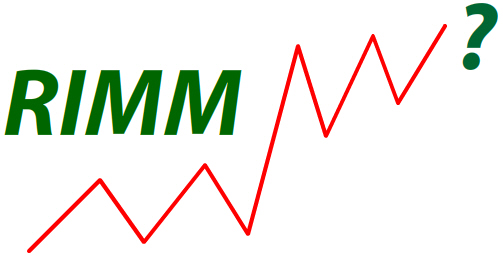 Ouch. According to Motley Fool , RIM is in for a tough time, at least as far as their stock price is concerned, as they have named Research in Motion the Worst Stock of 2008. Motley Fool is citing Changing Consumer Tastes, Stretched Valuation and General Economic Woes as challenges that will certainly bring RIM's valuation down this year. The question posed by MF isn't whether the valuation will drop, but more so by how much? (full story and my counter argument after the jump!)

Under the "Tastes Change" challenge, the author thinks RIM is following in Motorola and Palm's footsteps - once the maker of the hottest phones, today that's almost a "laughable" thought. With these companies out of the way the competition is now taking aim at RIM, and there is a lot of competition - with the iPhone leading the way followed by decent me-too phones (i.e. Verizon/LG Voyager) and emerging platforms like Google Android (which will soon lower the cost of entry and allow more competition to enter the mix) following suit . To keep up with the competition, RIM will undoubtedly have to spend a ton on R&D to keep innovating and getting into "Product Wars" can be costly and drag down a stock price.

Sum it all up and MF questions "does Research in Motion really deserve a price-to-earnings ratio of 50? Such a froth multiple might make sense for a rapidly growing company with nothing but open space ahead of it, but nor for the leader in a maturing, highly competitive industry."

Now, I'm not one to give to stock advice (and if I do you probably shouldn't take it!), and the author does make some valid points (i.e. Product Wars can get pricey), but I can think of a few compelling counter arguments as to why I believe RIM's stock price will hold strong in 2008:

1. RIM is diversified: The Motley Fool forgot about RIM's enterprise market, where RIM remains the undisputed king. Yes, there will be a battle waged between Windows Mobile and BlackBerry devices, but it hasn't happened yet. In the meantime, RIM is expanding into new markets every month and strengthening its grip on the enterprise world. Enterprise is RIM's turkey...and the Consumer Market is the Gravy. A lot of RIM's value is still coming from the enterprise market. Remember the outage and the way the world reacted? That's when everybody realized the world runs on BlackBerrys and the price began to climb. Nothing has changed there. That outage just made the consumer world more aware that BlackBerrys rock.

2. Consumer market is growing: I would disagree with the author that the smartphone market is mature. Remember that statistic from earlier in 2007 that smartphone penetration in the United States will grow from 10 Million to 70 Million+ by 2010? Doesn't seem very mature to me. Yes, the definition of smartphone is a bit blurry these days (with some feature phones becoming a lot smarter), but the fact remains more people are buying smartphones than ever before, and the market is growing. RIM isn't trying to keep up with the number of devices it sold the previous quarter, it's in a position of selling more devices each quarter than it ever did before as it takes big bites out of the growth in the market.

3. The iPhone is on ONE carrier in North America: Sure the iPhone is a cool consumer gadget. But as of right now, it's still only on one carrier in North America - AT&T (though I am hearing rumors that its coming to Canada may be announced at Macworld today). And while AT&T is a formidable company and is snapping up a lot of subscribers thanks to the iPhone, coverage is still king and AT&T coverage is not so good everywhere (it's still a phone - you have to get reception), and unlike Apple, RIM has a selection of phones on every carrier. And even the CDMA carriers, who are typically last to sit at the table for dinner, now have the BlackBerry Pearl 8130 in North America - and they are selling them like CRAZY.

4. Don't underestimate the Crack: It's called a CrackBerry for reason. The best way to sell a BlackBerry is to let a person use one for a week. We've hit a point where everybody knows at least one (or two or three or ten) people who use a BlackBerry. Odds are they are addicted to it and love it. When the berry-less people's contracts expire, a new BlackBerry will be on the shortlist of phones to upgrade to.

Buy, Sell or Hold? You can say I'm thinking with my heart and not with my head, or call me biased, but push come to shove I'm not selling my RIM stock anytime soon. Own any RIM stock? Tell us your thoughts?!