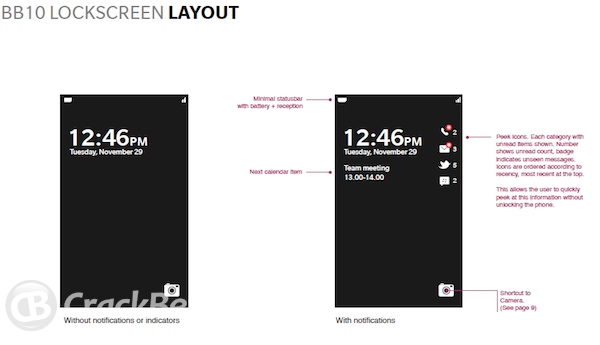 The forums are on fire tonight! There are now more screen casp of what could potentially be some BlackBerry 10 features later this year. Again, we're not sure that any of these are/will be official, so take them for what they're worth. The latest are a set of images that show off what could be the BlackBerry 10 notifications, lock and unlock screens. Keep reading for a look at what could be some more features included in BlackBerry 10!

The lock screen layout itself is pretty basic, showing a clock on the left and notificaitons ("Peek Icons) down the right side. The most recent notifications on top, these let you view everything without unlocking the phone. This brings over the BlackBerry notification banner we know and love, moving it to a new layout for BlackBerry 10.

Cinnamon Toast is seen here and is pretty impressive. Essentially as a notification comes in, you can tilt the device slightly to view more info, then again for another line of info. For example, an SMS alert is shown -- tilt the device to see who sent the message, then tilt more for the message itself. Amazingly awesome (if it holds true).