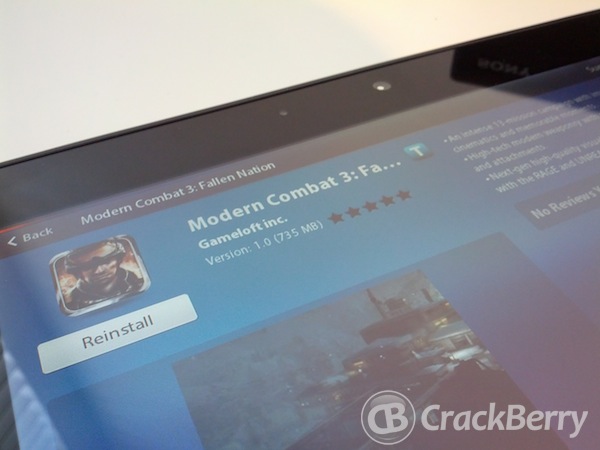 Fantastic news today for BlackBerry PlayBook owners. Visiting App World earlier I discovered Modern Combat 3: Fallen Nation was available to download. Modern Combat 2: Black Pegasus has always been a favourite of mine on the PlayBook so it's great that we finally get the sequel. If you enjoy shooting bad dudes and blowing stuff up this one is a must have app. Priced at $3.00 it won't break the bank and with 13 campaigns it should keep you occupied for hours.

What is hugely encouraging here is the fact that if this version of the game is now working on the PlayBook I can't see any reason why we won't see it in the future BlackBerry 10 App World. I have played the game on the iPhone and Android and the experience is just as good as on a tablet in my opinion. Should be perfect on the BB10 all touch device. Bring it on!

If you would like to read our full review of Modern Combat: Fallen Nation before purchasing the game fear not. We should have it complete within a few days.