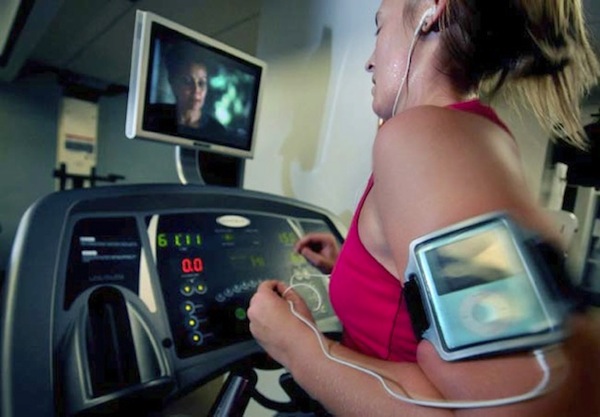 When we came up with the idea for the Mobile Nations Fitness Challenge I was pretty damn excited. I've never been one to go crazy with exercise, and as a blogger I pretty much sit in front of my computer for 9+ hours a day with only a few short stretches of actual exercise. I was eager to have a motivating factor to make me want to get up and do things to be healthier and get myself in shape. I've come to that point (as Kevin calls it "rock bottom") where I realized I would only get worse if I didn't actively do something about it. As part of the Mobile Nations Fitness Challenge I made a plan to eat healthier, exercse more and just be a better me.

Being the geek that I am, I looked for ways to integrate technology into my plan so I could keep myself on track through the process. We've been over some apps and various ways to use mobile technology to compliment these plans, but I think there's a point where enough is enough. Just how much technology is too much? Keep reading for my thoughts on using technology in your workout and dieting routines and just where I draw the line.

Using mobile apps, gadgets other tools to keep up with your workout or diet is nothing new. There are plenty of fun toys and apps that have been available for quite a while to help in the process. Kevin is a big fan of the Withings Wifi Body Scale for instance. It's a simple tool that takes something old (a scale) and combines it with something new (Wifi). It's not hard to work that into a routine as many of us have been using scales for years -- this one just has the added perk of collecting your data via Wifi and letting you view the results. It beats keeping track in your head or using a notebook (gasp!) to keep a log of weight losss. This is simple enough and I'm totally down with it - thumbs up in my book.

Along with this (but not quite "mobile" tech) is something like a standing desk. While the arguments are there both for and against them, this is something that many think is great for staying healthy. The hardest part here is getting used to standing while you work, and then from there, keeping at it. I've used a standing desk a bit in the past, but I've since gone back to an old-fashioned desk plus chair combo. I just remember to move around regularly and not stay sitting for long stretches and I seem to do fine. I even use a balance ball as a chair at times which keeps me moving while giving a super low impact workout. Kevin however swears by his standing desk. He adjusts it from standing to sitting at various points of the day or depending on what he is doing, and notes that you have to start out the day standing or else you won't get up from your chair at all. Just a bit of food for thought - and again, not something for everyone.

I think that mobile apps are handy to a certain extent as well. Be it for tracking your food intake, exercise or whatever, there are apps that show you just what you're doing and what you need to do better. I was a big believer in these as I got my routine started, and while I still use some, it's all a matter of picking what works for you and what doesn't. If you're dieting and really want to analyze your food and calorie intake, then a food tracking app is what you need. Apps that track your runs or workouts are handy too, but it all depends on just what you're looking to track along the way. For some people just running is enough and they don't feel the need to keep track of time or distance. I find that just keeping quick notes with Evernote is almost as easy as using specific apps since I can put in the information I want, how I want it.

I wanted to go above and beyond and see just what I was doing (or wasn't doing) during the course of my day, so I looked to Fitbit to fill that void. I was interested in the Jawbone UP, but with their recent issues gave a pass for the time being. The Fitbt seemed to have everything I needed - it measures activity level, steps per day, calories burned and even tracks you sleep. It's a small unit that looks like many Bluetooth headsets and can easily be carried in your pocket or clipped on your belt. The initial setup is fairly hitch-free (although I did have some issues) and from there you just need to remember to charge it up once a week or so. The Fitbit syncs when you're in range of the dock (which needs to be attached to your Mac or PC) and then you can view all of your stats through your Fitbit dashboard.

At first I was in love -- being able to see how active I was during the day reminded me to get up and move around. I could see how many steps I'd taken and know if I was doing my part to be a better me. Some days were better than others obviously, but for the most part the Fitbit helped me out and made me more aware of how acitve I was during the day. At first I liked to be able to track my steps and see how many calories I had burned, but after a while it just became boring. Sure there are foursquare-like achievments to unlock, but they weren't really a motivating factor. So after a while I decided to retire my Fitbit as it just wasn't for me. I do think it's a cool tool and something that certain people may get use from, but it's just not my thing.

Sexy and I Know It

Now I know at this point you're thinking I'm just lazy and that's why I can't be bothered with any of this tech - well that's not the case. I just think that when you do something like a new diet or workout plan, you want it to integrate to your daily plan simply and not add too much extra hassle. Something like the Fitbit wasn't a hassle really, but it was enough to think about that I just got bored with it and it didn't really help me achieve any goals - if I sit all day I know I'm being lazy, I don't need something to tell me that.  Certain apps that automatically do things like track your running or activities are great since you are most likely using your device for music during these anyway, so running another app isn't a stretch.

So overall I guess you just need to find what balance is good for you. If you think that having extra apps or accessories like a Fitbit will help you out, by all means go for it. Just keep in mind that simple may be better in most cases. People have been tracking their weight in their head for years and noting their runs with a watch and mile markers - it's not rocket science. So if you plan to start on a diet or workout routine, just keep these things in mind. You'll certainly want to stick out whatever you decide to do, so don't overwhelm yourself with crazy glowing gadgets and fun toys that will only get in your way.