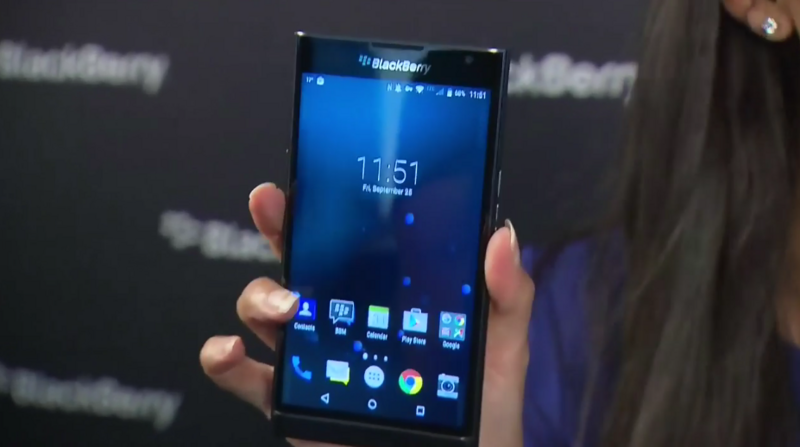 Normally, when there's a scheduled Apple-related event, be it a press announcement or a product release, the rest of the tech world lays low, avoiding their exciting news from getting buried under the breathless coverage of a fawning press. And initially it seemed like it would be that way with this week's release of the iPhone 6s and 6s Plus. Google had their Nexus event scheduled for the week after, and Microsoft planned to unveil their wares a week after that.

But there's one thing that was scheduled way in advance and couldn't be changed, lest they draw the wrath of the SEC: BlackBerry's quarterly earnings call. Normally they're pretty staid affairs, laden with numbers and optimistic talk of future earnings potential (that's true of just about every company's earnings calls). But with all the leaking evidence mounting, BlackBerry felt they had no choice and went ahead and announced the Android-powered Priv by BlackBerry — the portrait slider device with a physical keyboard of many fan's long-forgotten dreams, no less.

Who would've thought that it would be BlackBerry that'd cut through all the noise on iPhone launch day?

Heading into this week, we knew it would be an interesting one with BlackBerry set to announce their Q2 2016 earnings results but I don't think anyone accounted for what would happen in between the start of the week and the end of the week. Earnings report, the all-new Priv by BlackBerry slider getting announced and more is what we ended up with. A bit of a rollercoaster ride.

We're gearing up for the launch of some new Nexus devices as well as Android 6.0 Marshmallow, but there's plenty of current fodder to be had as well. We've been knee deep in reviews, Android Pay vs. Samsung Pay, and we've got an Android-powered BlackBerry on the way. To wit:

The iPhone 6s and iPhone 6s Plus are here! Apple launched this year's flagship phones as only Apple can, with pomp and circumstance from London to New York and around the world. Check out our ongoing coverage and if you need iPhone 6s help then jump on in!

Windows Central — On the horizon

Overall it was a relatively slow week for Microsoft. However, this is just the expected calm before the storm for October 6 in New York for their big press event. Here is what we expect Microsoft to reveal on that day.

Unfortunately (for Microsoft), the leaks keep happening for that show day. Over the weekend, the first legitimate images of the new Microsoft Band 2 found its way to the web. On board are a new, curved display and a big improvement in aesthetics. The Band 2 is expected to go on sale in early November.

A few internal Microsoft slides revealed the upcoming Lumia 950 and Lumia 950 XL flagship Windows Phones in all their glory. Although the information just confirmed what we already knew, it is still exciting to read about its iris scanner and QHD display. Both phones should be available sometime in November.

This week on Kicked Weekly we feature a moon lamp for your home, a baseball radar detector, robot spiders and more! Plus Dan calls Kim out on the awkward little moment in last week's show where she locked him out of her house. Also, how about some headphones that don't go over your ears but transmit sound through your skull? You know you want those!

It's your last change to get in on our prize giveaway! For your chance to win a Pebble Time smart watch, an Ilumi smart bulb 10-pack, or the Coolest Cooler, watch this video and subscribe to our YouTube channel. You've only got until the end of September so subscribe today!

This week on Connectedly we took a look at some more products featuring smart technology, like the Wilson X smart connected basketball and a Kickstarter campaign that features a smart strap for your "dumb" watch. We also broke down 10 products you can get to turn your home into a smart connected home.