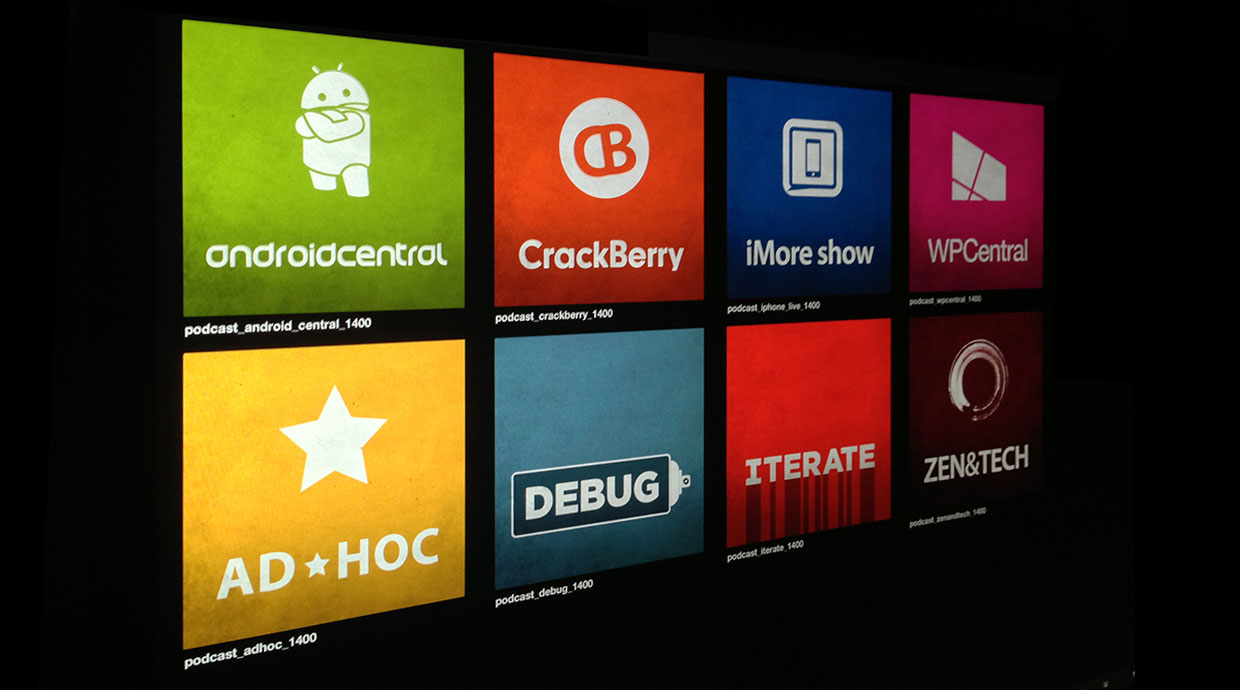 Hey everyone! It's time for a mighty Mobile Nations podcast network update, and a peak at some really cool stuff we have planned for 2013! First of all, we have all-new album art for the shows. The original concept was created by superstar designer Marc Edwards of Bjango to be crisp, clean, and modern. It's tough to make a whole catalog of shows consistent yet retain all their individual personalities. With Marc's help, I think we've nailed it. And by popular demand, we've even added a small TV logo to the bottom of all the video podcast album art so you can distinguish them from their audio counterparts at a glance. We absolutely love them, and we hope you do too. (And yes, we'll be making all of them available as HiDPI/Retina wallpaper for your phones and tablets later this week!)

If you haven't recently, please make sure you leave a review and rating for your favorite Mobile Nations shows, where ever and when ever you can. It encourages services (like iTunes) to feature us, that helps us get more great listeners and viewers like you, and we appreciate it a lot!

Now on with the shows!

Android Central remains the biggest, baddest podcast in the Google-space, and we're not slowing down with it any time soon. Our next project with Phil, Jerry, Alex and team is to try and integrate Google+ Hangouts into the live broadcasts. You've been asking about it and we want to do it. Neither Hangouts nor our switcher software is all the way there yet, and we want to make sure we keep at least 720p for the recordings, so there some challenges to overcome still, but we're working on it. We'll update you as soon as we know more!

BlackBerry is back, baby! And with it, the CrackBerry Podcast is back! I know in the past the CBCast has been more special event than regularly scheduled event, but with BlackBerry 10 released, the BlackBerry Z10 on the market, and the BlackBerry Q10 and more to come, Kevin, Adam, Bla1ze and the gang have never been more exited. Besides, I've told Kevin that if he doesn't podcast at least one or twice a month from now on, he doesn't get any Burger King. So you know it's on.

We've been mixing it up on the iMore show a lot lately. With our previous cast busy with their real lives and my joining MacBreek Weekly, it's caused some changes. I've done a few solo shows, but also had on an amazing array of guests, including Clayton Morris of Fox, Ryan Block of GDGT and Engadget, MG Siegler of parislemon and TechCrunch, Jim Dalrymple of the Loop, Arnold Kim of MacRumors, and more. We're going to be doing something else interesting soon, so stay tuned!

With the launch of Windows Phone 8 and the Surface, there's been an explosion of Microsoft mobile news of late, and Daniel and Jay have been bringing us absolutely all of it. With great sources and even better insight, they've been breaking down what devices are coming, which carriers they're going on, and which apps you absolutely need to check out.

We've all been traveling a lot, and at different times, so it's been tough getting everyone together for a Mobile Nations Podcast, where Kevin, Phil, Daniel, Derek, and I talk about the bigger picture stuff, trends in mobile, and what they mean for Android, BlackBerry, Windows Phone, webOS, and iOS. We're going to do our best to knock out at least one show a month though, and we expect you to yell at us any and every time it even looks like we're slowing down.

Ad hoc is our newest show, and also our most diverse. Basically, Guy and a bunch of us geeks -- the group always varies -- were arguing about something on the Internet, and then realized it would work much better as a podcast. The topics will vary, but always be about our favorite stuff. The first one was on the future of Star Wars post-Disney acquisition, the second on the new James Bond movie, Skyfall. The next one is going to be on the Batman.

Debug is our development show, where Guy English and I pour some virtual drinks and chat with the people who code the apps and games we love. We've had on the people responsible for Letterpress, Kaleidoscope, 1Password, Twitterrific, Tweetbot, Hundreds, the Zephyr jailbreak, and -- oh, yeah -- Karateka and Prince of Persia! And we've got a ton more to come!

Iterate is our design show, where Marc Edwards, Seth Clifford, and I talk to the people responsible for the look and feel of our favorite apps and games. We've been doing quite a few roundtables lately, including the realities of trying sell apps, skeuomorphism vs. digitally authentic design, along with interviews with everyone from the Iconfactory, to the New York Times, to Carbon, to DoubleTwist. And lots more to come!

If you hadn't noticed, all the previous shows were about stuff -- using and making it. ZEN & TECH is about you, and the quality of your life. The last few shows have been all about Fitness Month, exercise, nutrition, and sleep, but Georgia and I are also in the middle of a series on parenting in the digital age, as well as continuing our weekly episodes on everything from de-cluttering to coping with family, sex to handling stress. You're the most important gadget you'll ever own, and we want to help you take care of yourself.

We're thrilled with the reaction we've been getting to all the shows over the last few months. We've invested a lot of money in equipment and services to try and make the best shows we can, and while we still have a long, long way to go, we're definitely making some progress! Downloads are way up, and the video shows in particular have been through the roof lately (sometimes beating the audio shows in terms of downloads!)

And as always, we're still only just getting started!