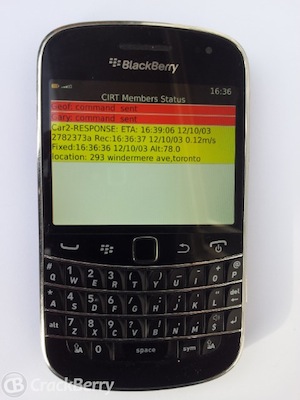 Mobile Innovations has recently announced a new BlackBerry smartphone law enforcement application especially designed to assist communications between Critical Incident Response Team officers responding to emergency situations. Primarily for use with SWAT teams and highway patrol the new MPACIRT app utilises PIN to PIN messaging as well as GPS to locate, alert, inform and report team members' status and distance from the incident via the BlackBerry.

"MPACIRT leverages the expertise we've gained with previous development of two of our existing apps." Explains Bauer. "You could say that MPA CIRT is a hybrid of MPAOfficerProtection, a white label PIN to PIN app sold through one of our partners, and MPATracker which locates and shows BlackBerry team members using GPS."

With the MPACIRT app being made available through a per user costing model, as opposed to a per month or per use basis, and with no BES required it is extremely cost effective which everybody likes in this day and age. Mobile Innovations have been working with BlackBerry for six years now, deploying advanced applications for the platform. Remember when I interviewed Constable Ken Koke from the Chatham-Kent Police Department as he drives the PlayBook Cruiser? Well the software he uses on the PlayBook is another one of Mobile Innovations' creations.

Mobile Innovations has also now committed to supporting BlackBerry 10. The company has a Dev Alpha device and are working to ensure that the Law Enforcement agencies that utilize their applications will move forward with the times. I suspect the cops who use BlackBerry 10 may be rather happy with their new smartphones!