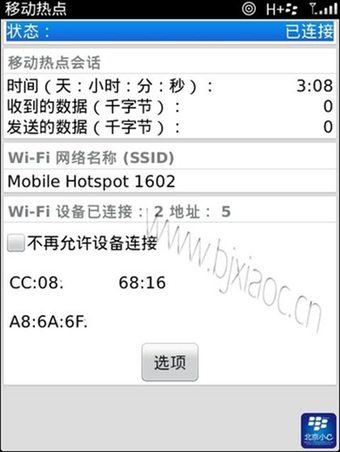 We've known for quite some time now that during RIM's initial testing of OS 6.1 which, later turned into OS 7 that the wireless HotSpot feature was something they were hoping to include. As we know it, BlackBerry 7 was released on various devices and that feature was nowhere to be found. Carrier information has shown on more then one occasion it will be included with later OS updates but RIM will neither confirm nor deny that it even exists.

That leads us to BlackBerry 7.1, the update purported to have the HotSpot feature built-in. It's been in testing for quite a while now and while and while we've heard plenty about it -- we've not seen anything from it until now. Over at bjxiaoc they've managed to post up some purported images of a BlackBerry Torch 9810 running OS 7.1.0.58 that shows HotSpot baked into the OS.

When will it roll out? We don't know. Taking these images under consideration OS 7.1 is still fairly young and if RIM follows their normal release patterns a consumer release won't make its way to carriers until they are in - at the very least - .100 revisions but no telling how old these images are nor the OS itself. Either way, take a look -- and let's hope RIM knocks this out to at least a few BlackBerry 7 devices soon enough. Since the OS is out there, maybe it will leak.