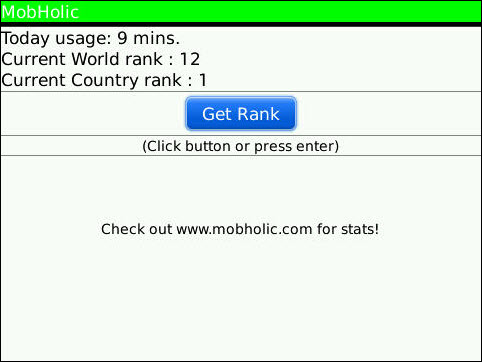 We've always been fans of the I Love BlackBerry app around here. That application allows you to track your BlackBerry usage so that you can decide if you really are a BlackBerry addict or not. Sadly, that application hasn't been updated in a while and although it still works, Mobholic has moved in offering a similar like system with a few improvements added into the mix.

Mobholic is available via BlackBerry App World for $2.99 and while the app may not sound as promising due to the fact it requires payment, it certainly offers something else which makes it worth the $2.99 you'll be paying. Mobholic will track your usage statistics and actually upload them to their website. This allows you to compete with others in different countries as well as compete with fellow BlackBerry users you may know.

Pretty cool, as you can tell from the above pic I have a lot of catching up to do but, I invite you all to follow along and at the same time compete against each other. Let's see who out there is among the hardcore BlackBerry users here at CrackBerry. It'll be fun, if you download the app drop your name in the comments so we can follow along together. Mine is of course, Bla1ze and it'll be listed under the Canadian users.